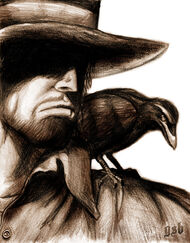 Zoltan is a raven who is a pet of Brown. He is able to speak and utters mainly profanities and wisecracks, even though Brown once tried to teach him the Lord's Prayer. He ate the eyes of Roland Deschain's mule that died.

Zoltan was the name of a folksinger that Stephen King knew at the University of Maine.

Retrieved from "https://darktower.fandom.com/wiki/Zoltan?oldid=20515"
Community content is available under CC-BY-SA unless otherwise noted.