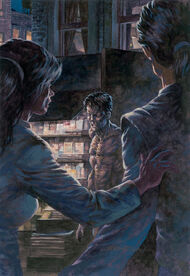 Appearances
Wolves of the Calla
Known
None

The Vagrant Dead are people who have died that have yet to move on. They either have refused to accept the fact that they are dead or they were killed so quickly that they haven't realized it yet. As such, they always stay near the places where they died.

They can be seen when one goes todash. They are frightening to behold as they bear the injuries that they received in life. Even though they are not visible when one is not todash, people can still sense them and will avoid walking into them if at all possible.

Roland Deschain learned that it was possible to see these creatures when todash from Christopher Johns when he was still a boy.

The vagrant dead were seen in Wolves of the Calla when Roland and his ka-tet were taken by Black Thirteen to Todash version of New York City. Also Father Callahan ran into some during his travels on the Highways in Hiding.

Retrieved from "https://darktower.fandom.com/wiki/Vagrant_Dead?oldid=20096"
Community content is available under CC-BY-SA unless otherwise noted.