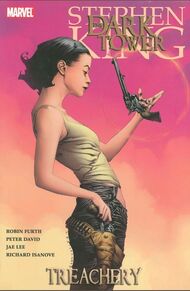 Treachery was first published on September 10, 2008 with the last issue published February 25, 2009; there are six issues. The hardback version was published April 21, 2009 containing the entire comic collection.

The comics continue on from the events of The Long Road Home and center around Roland's ever-growing addiction to Maerlyn's Grapefruit. The niece of Cort, Aileen Ritter, also plays a role during the comics, wanting to be the first female gunslinger. Cuthbert Allgood and Alain Johns are made full gunslingers due to their exploits in Hambry.

Gabrielle Deschain tries to atone for betraying her husband, but ultimately ends up betraying him again. She eventually loses her life after she tries to steal the Grapefruit from Roland, who thinks she is Rhea of the Cöos.