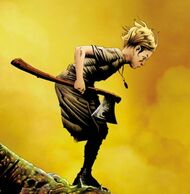 Tim Ross is the protagonist in the tale 'The Wind Through the Keyhole (tale)' that Roland Deschain tells in the book by the same name. His main goal is to keep his mother, Nell Ross (later Nell Kells), safe, following his father's mysterious death. Roland revealed that Tim later became a gunslinger, known first as Lefty Ross and later as Tim Stoutheart, after his quest.

The Wind Through the KeyholeEdit

In The Wind Through the Keyhole, Tim goes on a journey to regain Nell's vision by seeking out the aid of 'the Ageless Stranger', Maerlyn. After murdering his father, Big Kells married Nell and beat her so severely that it left her blind.

After returning from his quest, Tim heals Nell's sight and is nearly killed by Big Kells, but Nell saves him by killing Big Kells with her late husband's ax.

Add a photo to this gallery
Retrieved from "https://darktower.fandom.com/wiki/Tim_Ross?oldid=13506"
Community content is available under CC-BY-SA unless otherwise noted.