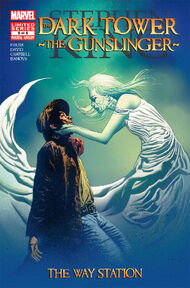 The events take place after The Battle of Tull and is the second set of comics to be set during the events of the novel, The Gunslinger. Roland meets Jake, faces one of the speaking ring demons, and takes the Prophetic Jawbone.

Retrieved from "https://darktower.fandom.com/wiki/The_Way_Station_(Comics)?oldid=13894"
Community content is available under CC-BY-SA unless otherwise noted.