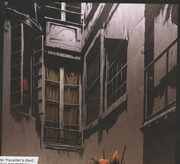 The Traveller's Rest is owned by Coral Thorin in Hambry. Sheemie works here as a waiter while Sheb McCurdy plays the piano. It is seen various times throughout Wizard and Glass and The Gunslinger Born.

The stand off between the Gunslinger and Big Coffin Hunters took place here, three days after Roland and his mates came to city. Sheemie accidentally spilled Camel Piss on Roy Depape, who forced Sheemie to lick his boots. Before he did it, Cuthbert Allgood/Arthur Heath came to stop him and hit Roy in the hand with his slingshot. When Cuthbert recharged his slingshot, Clay Reynolds pointed his gun at him. Alain Johns came behind Reynolds and put a knife to his throat, and Eldred Jonas, who was outside on the street, realized that something was wrong and came into The Traveller's Rest. After seeing the commotion, he pointed his gun at Alain's head. Roland, who was looking from behind a totem of the Bear, came out and put a knife to Eldred's back. This event was talked about in Hambry for years, and five hundred people said they were at the Rest that night.


Rhea of the Cöos later comes here with Cordelia Delgado to rally the villagers against Susan Delgado and convinces them to burn her at the Charyou Tree.

Retrieved from "https://darktower.fandom.com/wiki/The_Traveller%27s_Rest?oldid=14041"
Community content is available under CC-BY-SA unless otherwise noted.