Start a Wiki
The Talisman 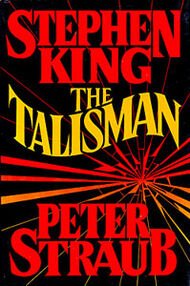 The Talisman is a horror/fantasy novel written by Stephen King and Peter Straub. The novel introduces the character of Jack Sawyer, a boy who has to make a dangerous cross-country trip to save his mother's life.

Jack Sawyer sets out from New Hampshire to reach the other end of the country and find a powerful artifact, the "Talisman", that can heal his mother's cancer. With the help of Speedy Parker, Jack learns how to flip over into a parallel world called "the Territories". In the Territories, most people in Jack's world have a counterpart or "Twinner", with the notable exception being Jack himself. Jack's journey is threatened by his Uncle Morgan Sloat and his twinner, Morgan of Orris, who want Jack's mother to die in order to inherit Jack's father's business. Along the way, Jack is joined by his old friend (and son of Morgan), Richard, and a new friend, a werewolf simply named "Wolf". Jack eventually reaches the abandoned Agincourt Hotel, defeats Morgan, and returns to New Hampshire to heal his mother.

The theme of Twinners is shared between The Talisman and The Dark Tower Series. The different universes share a similar set of characters and the people that do not have Twinners are usually special in some way.

It is possible that Jack Sawyer is in fact the twinner of Tim Ross the main protagonist of The Wind Through The Keyhole. Both characters bear major resemblance in appearance, age and character traits, as well as the circumstances of how their stories play out. Both characters must go on a great quest in order to find a magical artifact that will heal their mothers from serious ailments; The father of each character was murdered by their own step father; Jack and Tim are accompanied by a Wolf and a Tyger on their respective quests; it is told that Tim grew up to be a Gunslinger known as Tim Stoutheart and it is revealed in "Black House" that Jack grew up to be a Police Officer. Roland often mistakes Police Officers for Gunslingers.

The Talisman has very similar qualities to the Dark Tower itself. It is also the center of many different universes. However, it is possible that the full nature of the Dark Tower is embodied in the combination of the Talisman and the Agincourt Hotel. The Agincourt is a large black building in America and appears as a black castle in the Territories.

Morgan Sloat uses a magical key to tear open holes between worlds and to cross between them. The description is very similar to that of a thinny.

The "Blasted Lands" bear a striking resemblance to The Waste Lands in the Dark Tower series. In both, terrifying creatures inhabit the lands and the only way to cross them is by train.

Retrieved from "https://darktower.fandom.com/wiki/The_Talisman?oldid=20430"
Community content is available under CC-BY-SA unless otherwise noted.