Start a Wiki
The Stand 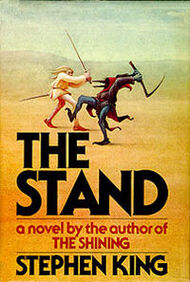 The Stand is a 1978 novel by Stephen King. It tells the story of a group of survivors, following a devastating plague. To The Dark Tower Series, it is most noticed as being a major cross over world or level of the Tower.

An extremely virulent form of influenza escapes a government facility. The disease spreads quickly and kills 99.4% of the world's population. The survivors in the United States soon coalesce into two groups. The immoral people are called to follow Randall Flagg (aka the Hardcase, the Walkin' Dude, and the Dark Man) in Las Vegas. All of the good people are called to Mother Abagail in Nebraska. After enough survivors gather in Nebraska, they move out to Boulder, Colorado, where they set up a pure democratic government. They learn of Flagg's dictatorship in Las Vegas and how he has drawn most of the world's technical knowledge. In an attempt to stop him before he becomes too powerful, several of the good guys go to against Flagg. Instead of a battle, the faith of the survivors brings down "the Hand of God" that sets off the nuclear bomb that was brought to Las Vegas.

The Topeka that Roland Deschain and his ka-tet are travelling through in Wizard and Glass appears to be part of The Stand's level of the Dark Tower. Topeka has been ravaged by a superflu nicknamed "Captain Trips". They see graffiti in Topeka of Flagg, Mother Abagail, and the Crimson King.

The Stand also features Flagg, a main antagonist in The Dark Tower. Flagg's powers are clearly evident in The Stand'. He is able to inspire a great deal of loyalty in his followers, is able to change shape at will, and can even increase the intelligence of his followers in the case of Lloyd Henreid. In the extended version, Flagg's near-immortality is also on display as he is able to survive the nuclear explosion and washes up in the South Pacific.

In the complete and uncut edition, ka is implied. At the end of the book, Flagg says that life is a wheel that comes to the same place in the end.

Newest Edition
Add a photo to this gallery
Retrieved from "https://darktower.fandom.com/wiki/The_Stand?oldid=16106"
Community content is available under CC-BY-SA unless otherwise noted.