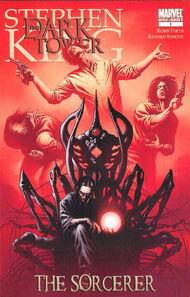 The Sorcerer was first published on April 15, 2009 as a one-shot comic and was later included in the hardback edition of The Fall of Gilead.

It serves to further fill in the events of Treachery and acts as a prelude to the Fall of Gilead.

Marten Broadcloak talks about the Deck of Chance and how Gilead will fall, revealing the events of his childhood and affair with the demon in Maerlyn's Grapefruit.

Gabrielle Deschain agrees to kill her husband. It is then revealed that Steven Deschain has become obsessed with the Grapefruit; through it the demon of the sphere learns of Marten's affair with Gabrielle, to her annoyance.

Storing it away in his safe, he, with Robert Allgood and Christopher Johns, say their goodbyes to Charles Champignon and his wife, who are leaving the city but are later taken hostage on their travels.

Clay Reynolds is at the whim of John Farson, who then learns the Grapefruit is in Gilead. He gets his captive, Charles Champignon, to write a letter of introduction for his nephew James Farson, giving him the false name of Kingson. He does this to save his wife, though they kill her anyway.

Marten instructs James to give a dagger to Gabrielle. and also gives him a book and is instructed to retrieve the sphere.

The demon of the grapefruits instructs Roland Deschain to kill his mother as she is sleeping with her lover.

Kingson is killed and taken to the mortuary where Marten resurrects him and he leaves the city through a drawn doorway.

Retrieved from "https://darktower.fandom.com/wiki/The_Sorcerer?oldid=13892"
Community content is available under CC-BY-SA unless otherwise noted.