Start a Wiki
The Regulators 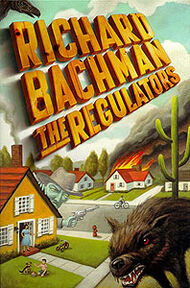 The Regulators is a novel written by Stephen King under his pseudonym, Richard Bachman. It is the companion novel to Stephen King's Desperation.

The story, using the same main character names as in Desperation- only in somewhat different roles, takes place in the fictional town of Wentworth, Ohio, a typical suburban community. On Poplar Street, an autistic boy named Seth has gained the power to control reality through the help of a being known as Tak (The entity that also appears in Desperation). Soon, Poplar Street begins to change shape, transforming from a quiet suburb into a wild west caricuture based on what Seth has seen on his t.v. Meanwhile, the other residents of the street are being attacked by the many beings that Seth's imagination is creating, due to Tak's control over them. These residents are forced to work together to stop Seth and Tak from completely transforming the world around them and stop Tak before he kills anyone else.

Connections to the Dark Tower SeriesEdit

The imaginary place where Audrey Wyler takes Seth to escape from Tak is similar to Mia’s ability to travel to the Castle on the Abyss and Susannah’s journeys to the Dogan.

It is likely that Tak is one of the creatures described as being from the todash spaces between universes. Tak mentions can-toi, another name for the “Low Men”.

Retrieved from "https://darktower.fandom.com/wiki/The_Regulators?oldid=14426"
Community content is available under CC-BY-SA unless otherwise noted.