Start a Wiki
The Mist 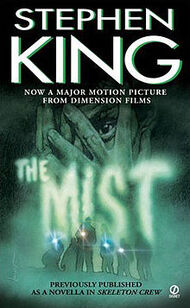 The Mist is a novella by Stephen King. It was originally collected in the 1980 anthology, Dark Forces, and in King's own collection, Skeleton Crew, but was later re-published on its own by Signet. The story was adapted into a 2007 film.

A thick mist covers the town of Bridgton, Maine. It hides strange monsters that attack anyone who goes outside. A group of people are trapped in a supermarket. The people speculate that the mist was caused by a secret government establishment nearby, "The Arrowhead Project". A smaller group, led by film artist David Drayton, attempts to lead a group to find safety. They pile into a car and they hear one word broadcast on the radio, "Hartford". They continue on hoping to find a safe haven.

It is likely that the Arrowhead Project was able to create a thinny. This thinny allowed monsters to escape the Todash Space to roam free. However, whether this is true or not has never been confirmed.

In the opening scenes of the film adaption of The Mist, film artist David Drayton is seen finalizing a portrait of Roland Deschain, standing before The Dark Tower, with a Rose at his side.

The line, "My life for you", spoken by Mrs. Carmody in the film, is a recurring line in other Stephen King texts, spoken by villainous characters to Randall Flagg.

Retrieved from "https://darktower.fandom.com/wiki/The_Mist?oldid=20184"
Community content is available under CC-BY-SA unless otherwise noted.