The Man in Black (Comic) 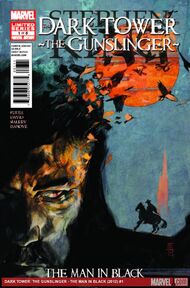 The first issue in The Man in Black set of comics.
Collected
Publication Dates
June 20, 2012 -
Chapters
Five
Previous
The_Way_Station_(Comics)
Next

The Man in Black  is a set of comics to based on The Dark Tower I: The Gunslinger. It takes place after The Way Station (Comics). The first issue was released June 20, 2012 and the last on October 17, 2012.

It is the last comic collection based on The Gunslinger.

Retrieved from "https://darktower.fandom.com/wiki/The_Man_in_Black_(Comics)?oldid=11797"
Community content is available under CC-BY-SA unless otherwise noted.