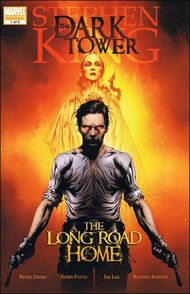 The Long Road Home was first published on March 5, 2008, with the last issue published on July 2, 2008; there are five issues. The hardback version was published October 7, 2008 containing the entire comic collection.

It carries on directly from the events of The Gunslinger Born, detailing Roland, Cuthbert, and Alain's return to Mejis whilst fleeing the Barony followed by the forces of Clay Reynolds.


Roland becomes trapped by Maerlyn's Grapefruit after he shoots it, its demon form trapping his soul inside. There he meets the Crimson King for the first time, learning of their shared ancestry.

Sheemie follows the three men but loses them and ends up at the Dogan where he becomes a psychic. He catches up with the three men and saves Roland from the sphere's clutches.

Retrieved from "https://darktower.fandom.com/wiki/The_Long_Road_Home?oldid=13888"
Community content is available under CC-BY-SA unless otherwise noted.