Start a Wiki
The Little Sisters of Eluria 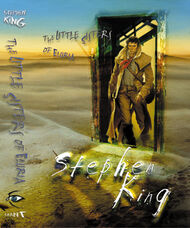 For the comic collection see: Little Sisters of Eluria (Comic).

The Little Sisters of Eluria is a short story originally published in 1998 in a collection called Legends: Short Novels by the Masters of Modern Fantasy. In 2002, it was collected and included in King's Everything's Eventual.

Chronologically, the story within takes place before the events of the Dark Tower Series - though after the story of Roland Deschain's past he recounts in Wizard and Glass.

Marvel Comics also published a five chapter comic series based on the story by the same name.

The story opens in Roland's younger days as he is trying to track down the Man in Black. Roland rides up to a deserted town on his horse, Topsy. Roland explores the town only to find it is called Eluria and a young boy named James' body lying in a watering trough as a dog with a cross in his fur tries to bite off his shoe. James is wearing a gold necklace which reads James, loved of family loved of God. Roland takes this necklace in the case he finds any survivors. As Topsy falls over dead, Roland discovers a group of slow mutants infesting the town and is trying to keep them away from him until he is ambushed by one who smacks his right shoulder. An entire tribe of slow mutants soon gathers around Roland and begins to beat him until he passes out.

Roland awakens in a white tent, suspended above the bed, with two other men, a young boy Roland mistakens for James and an old man. Roland finds himself wearing the necklace he took from the boy and a white gown. As Roland lies in bed he meets the Little Sisters: Big Sister Mary, Sister Coquina, Sister Louise, Sister Michela, and Sister Tamara. Each of the sisters looks like Rhea of the Cöos in their true form which Roland just barely sees as an illusion. The false form of the sisters might be beautiful if Roland couldn't see their true form occasionally appear. Roland also meets Sister Jenna who is beautiful and doesn't look to be hiding her true form. Jenna is also the one who put the necklace on Roland and who he revealed his true identity to. As Roland lies in his sling, the Sisters bring him soup with drugs in it to make him sleep and temporarily paralyze him. he discovers that there are little black bugs crawling over his body helping him heal, these bugs are called the Doctors. He also begins to suspect the Sisters are hiding something. The Sisters also suspect Roland is lying, they begin to question him about who he is and if the boy in the next bed is his brother. The boy, John Norman, tells the Sisters he is Roland's brother (Roland eldest, John youngest and eight in between). John tells Roland the necklace he wears will protect him from the Sisters and reveals what he has suspected, the Sisters are not human (not even Jenna).

At night as Roland sleeps, he wakes to the sound of giggling and feigns sleep only to find the Sister going to the old man and hears a slurping sound. The Sisters gather around him shortly after leading to Sister Mary bringing him off and sharing his spend with the other Sisters who are revealed to have blood surrounding their mouths. Roland passes back into his dream state. Roland wakes up the next day and finds the old man is no longer in the infirmary. Roland eventually heals but cannot escape from the Sisters because of the drug in his soup. Sister Jenna begins giving Roland herbs to counteract the drugs. One night as Roland sleeps he hears the Sisters in the room along with someone else. He finds it is one of the mutants who attacked him, Ralph, the mutant rips the medallion off of John and the Sisters begin to devour him. The mutant escapes, feeling the Sisters would kill him soon after they're finished with John.

The next night, Roland plans to leave with Jenna but they are soon stopped by four of the other Sisters. Jenna sends the doctors after them as she and Roland escape. Sister Mary stops the two as they attempt to escape but is soon killed by the Cross Dog. As soon as Roland and Jenna escape they fall asleep. Roland awakes to find Jenna gone but her clothes remain. Inside the clothes are several Doctors. After a moment of sorrow, Roland continues his quest to find Walter.

Retrieved from "https://darktower.fandom.com/wiki/The_Little_Sisters_of_Eluria?oldid=10862"
Community content is available under CC-BY-SA unless otherwise noted.