Start a Wiki
The Gunslinger Born 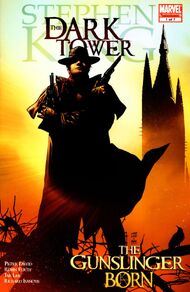 The Gunslinger Born is a fan fiction comic book first published on February 7, 2007 with the last issue published on August 1, 2007; there are seven issues. The hardback version was published November 7, 2007 containing the entire comic collection.

The story opens with Roland and his ka-tet training with their eagles under the guidance of Cort. After training Roland sees Marten, who calls him over to show him his mother unclothed in Marten's bed. Roland angrily goes to Cort and challenges him for his father's guns. Cort agrees and lets Roland go prepare, with Roland returning with David the hawk as his chosen weapon; he wins the duel, becoming a gunslinger.

The comic was plotted by Stephen King's personal assistant Robin Furth, scripted by Peter David , and is illustrated by Jae Lee and Richard Isanove.

Retrieved from "https://darktower.fandom.com/wiki/The_Gunslinger_Born?oldid=19773"
Community content is available under CC-BY-SA unless otherwise noted.