The Fall of Gilead 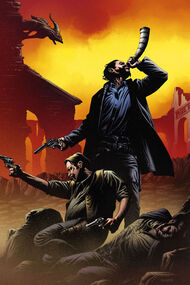 The Fall of Gilead was first published on May 13, 2009 with the last issue being published November 25, 2009; there are six issues. The hardback version was published February 23, 2010, containing the entire comic collection as well as the comic The Sorcerer.

Joining on from the events of The Sorcerer and Treachery the comics detail the final fall of the great city of Gilead from both external and internal forces which follow John Farson.

The comics show The Affiliation broken and nearly destroyed and details the deaths of some of the great Gunslingers and teachers from Gilead such as Steven Deschain, Cort and Abel Vannay as well as the massacre of the innocent men women and children who live there.

Farson's forces sweep through the city and the last vestiges of The Affiliation now led by Roland Deschain have to flee through the underground of Gilead.

Retrieved from "https://darktower.fandom.com/wiki/The_Fall_of_Gilead?oldid=10288"
Community content is available under CC-BY-SA unless otherwise noted.