Start a Wiki
The Eyes of the Dragon 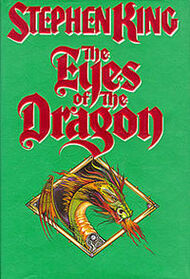 The Eyes of the Dragon is a fantasy novel written by Stephen King. The novel's style is a departure from King's usual; it is written in the typical fantasy style rather than including horror elements as King usually does. The story takes place in the fictional kingdom of Delain.

At the beginning of the novel, Flagg secretly attempts to assassinate the Queen Sasha in order to secure his influence on the throne. He finally succeeds in having the Queen die while in childbirth with Thomas, her second child. Flagg later decides that Peter, the older son, is a greater threat to his power than Queen Sasha. Therefore Flagg has King Roland poisoned and Peter framed for the murder. Thomas witnesses this through a secret passage where he can look through the glass eyes of a mounted dragon head. After a brief trial, Peter is locked up in a tower called the Needle. Thomas is then crowned King despite being only twelve years old. Due to his youth and his inexperience, he is forced to give Flagg enormous amounts of power. Peter eventually escapes from the Needle. After the escape, he and his allies rush to get the old king Roland’s bow and arrow and kill Flagg, but the bow is not to be found. Flagg, now revealed as a demonic being, is about to kill them when Thomas reveals himself. He tells Flagg that he watched Flagg poison Roland. Thomas shoots Flagg in the eye, but Flagg uses magic to disappear and escape. In the end, Peter is declared to be the rightful king. Thomas sets off with his butler, Dennis, to find Flagg. They find and confront him. The outcome of that confrontation is not given, but it can be safely assumed that Flagg escaped once again.

Names are very similar between The Eyes of the Dragon and The Dark Tower Series. Delain is very close to Deschain and the old king's name is Roland.

The tower where Peter is imprisoned was called the Needle. There is a rock formation outside Algul Siento called "Steek-tete" or the Little Needle in reference to its shape.

Thomas and Dennis make an exceptionally brief appearance in the series, a passing reference to them in The Drawing of the Three.

Delain is located in In-World, a part of Roland's Mid-World.

Rhea of the Cöos is briefly mentioned as a harbinger of disaster.

The main villain in The Eyes of the Dragon is Flagg, also one of the prime villains in the Dark Tower series.

Retrieved from "https://darktower.fandom.com/wiki/The_Eyes_of_the_Dragon?oldid=20531"
Community content is available under CC-BY-SA unless otherwise noted.