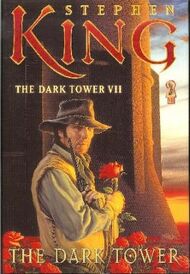 The Dark Tower is the seventh novel in the series of the same name, written by Stephen King. The book has four sub-titles: REPRODUCTION, REVELATION, REDEMPTION, and RESUMPTION.

The book begins with the ka-tet separated in both time and space. Susannah Dean is with Mia in Fedic delivering Mordred Deschain while Jake Chambers and Donald Callahan are in New York City in 1999 to rescue her. Roland Deschain and Eddie Dean are in Maine after convincing Calvin Tower to sell the vacant lot.

Callahan and Jake enter the Dixie Pig in order to find Susannah. With help from the sköldpadda, Jake is able to safely cross the room full of the servants of the Crimson King. Callahan is not so lucky and kills himself rather than be eaten alive. Jake, with aid from Oy, successfully navigates the Mind-trap and enters Fedic.

Eddie and Roland call John Cullum and convince him to go to New York City and find Moses Carver in order to found the Tet Corporation. They head to Turtleback Lane and travel back to Mid-World through the door behind the 19th house on Turtleback Lane, Cara Laughs.

The tet is reunited in Fedic. They find their way to a door that will take them to Algul Siento with the help of Nigel. Nigel, though, has also been helping Mordred find food and to spy on them. Walter approaches Mordred with the hopes of using the sigul on Mordred's heel to enter the Dark Tower. Instead, Mordred is able to enter Walter's mind which allows him to paralyze and consume the man.

Roland Deschain's ka-tet comes to Algul Siento in order to set the Breakers free and protect the Beams. They are met by a group of Breakers friendly to their cause including Sheemie, Roland's old friend from Mejis. Roland quickly establishes a plan. On the day of the attack, they wreak havoc by lighting several buildings on fire and by approaching the town from different directions in order to create the illusion of many people attacking at once. The battle goes in favor of the tet until the very end, when Pimli Prentiss is able to mortally wound Eddie. Eddie's last words are a warning about a being named Dandelo.

While Susannah stays behind to bury Eddie, Roland and Jake Chambers go back to the Keystone World to save Stephen King's life. The pair recruit the services of Irene Tassenbaum to drive them to the scene of the accident. Jake gives up his life to save King's. Roland buries him along the side of the road and Tassenbaum says that he will return and plant a rose on his grave. Tassenbaum and Roland drive to New York City to see what became of the Tet Corporation. In their absence, the company has flourished. Moses Carver tells his story and returns Aunt Talitha's Cross to Roland. Roland and Oy return to Mid-World through the door in the Dixie Pig.

Roland comes back to Fedic where Susannah is waiting for him. They take a passage under the castle and the mountains, but they are pursued by a todash monster. They manage to fend it off by lighting bones using the Sterno that Susannah had found and that Roland had mocked. When they come out of the tunnel, they find themselves on the Badlands. Their trek becomes very uncomfortable as their clothes are ill-suited to the cold weather.

They come upon Le Casse Roi Russe where they encounter Rando Thoughtful, the King's Minister of State. Thoughtful tells of the Crimson King's last days in his castle. After ordering his servants to commit suicide in front of him and smashing the Wizard's Rainbow, he commits a violent suicide using a spoon and continues towards the Tower as an Undead creature. After leaving the castle, Roland and Susannah hear a scream in the distance. It was the sound of Mordred Deschain eating Thoughtful.

What's left of the tet comes to the White Lands of Empathica. There, they meet an older man in a pleasant dwelling who calls himself Joe Collins. He nearly kills Roland Deschain, Susannah Dean, and Oy while feeding on their laughing response to his comedy stylings. They are saved when Susannah accidentally swats the sore on her mouth and has to go to the bathroom to stop the bleeding. In Collins' medicine cabinet, she finds a note from Stephen King that reveals the fact that Collins is the person that Eddie had warned of, Dandelo. When Susannah comes out of the bathroom, she shoots Dandelo and discovers a secret room where Dandelo had held Patrick Danville captive for many years.

Despite the offer from Stuttering Bill to take them to the Dark Tower on a powered sled, Roland decides to continue on foot. Susannah, who has been haunted by dreams of Eddie and Jake, decides to try and leave Mid-World and find them. She recruits Danville to draw her a door to leave. She shares a tear-soaked goodbye with Roland before going through the door.

Mordred Deschain attacks Roland's camp the last night before Roland would reach the Tower. With the help of Oy, Roland wakes up in time to save himself and kill Mordred. Unfortunately, he was not in time to save Oy's life. Oy's haunting last word is "Olan".

Finally, Roland reaches the field of Can'-Ka No Rey. It is the scene of the final battle between Roland Deschain and the Crimson King. The King is locked outside the tower on a balcony and can only throw sneetches at Roland while waiting for him to be drawn to the Tower. Roland's secret weapon is Patrick Danville who draws a picture of the King and uses a combination of dye from rose petals and Roland's blood to color the King's eyes. After the picture was complete, Danville is able to erase everything except the eyes and Roland is able to enter the Tower safely.

In the epilogue, we see what happened to Susannah when she stepped through The Artist's door into New York City. One of Roland's sandalwood guns has rusted through and Susannah tosses the gun into a dumpster. She meets Eddie and Jake who are now brothers with the last name of Toren. Neither one remembers their adventures with Susannah, but Eddie is already in love with her. Stephen King assures us that a dog named Oy will later come into the picture.

In the coda, we see Roland climbing the Tower at long last. The rooms in the Tower all depict scenes from Roland's life and each has a distinctive smell. When Roland reaches the top, he sees the Mohaine Desert. He is sucked through, his memories fade, and his quest begins anew. This time however, Roland finds himself equipped with the Horn of Eld, the one he had lost before. This appears to be a hint that things may yet change and that Roland may eventually find redemption. The book ends the way The Gunslinger began, with the line; "The man in black fled across the desert, and the gunslinger followed."

Add a photo to this gallery
Retrieved from "https://darktower.fandom.com/wiki/The_Dark_Tower_VII:_The_Dark_Tower?oldid=21121"
Community content is available under CC-BY-SA unless otherwise noted.