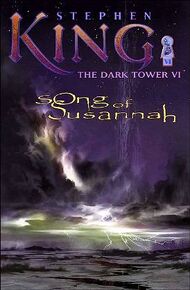 Song of Susannah is the sixth book in Stephen King's Dark Tower series. It was published in 2004. It details the events following Susannah Dean's escape to deliver her baby. This was the "quickest" of all the books: all the action have happened in a bit more than 24 hours. The book's subtitle is REPRODUCTION.

Song of Susannah begins with Roland, Eddie, and Jake wondering how they are going to find Susannah, after her escape through Doorway Cave. Fortunately, Roland knows that the Manni know how to use the remnants of magic to re-open the door. The plan is for Henchick and the Manni to open the door twice. Roland and Eddie would go through first to rescue Susannah, while Jake and Father Callahan would go through next to convince Calvin Tower to sell the vacant lot. It does not go according to the plan; the groups get sucked through in opposite order.

Meanwhile in New York City in the year 1999, Mia is frantically searching for the place to have her baby. Susannah finds the sköldpadda inside a pocket in the Mid-World bowling bag. She uses it to get a hotel room to await the phone call that Mia is expecting. While Mia and Susannah wait, they discuss the origins of the baby. Eventually, Richard Sayre calls and instructs Mia to go to the Dixie Pig to have her baby. Susannah leaves the sköldpadda outside the dixie Pig for Jake to find. Inside, Susannah/Mia is taken through a door to Fedic where they are separated.

Back in 1977, Roland and Eddie are dropped in the middle of an ambush set up by Jack Andolini. They meet John Cullum who helps Roland and Eddie escape the general store. After they leave store, Cullum took them back to his house where he told them of Stephen King, Turtleback Lane, and the "walk-ins". He lends them his old Ford Galaxie truck and is told to head to Vermont.

In 1999 again, the trio of Jake, Callahan, and Oy land violently in the middle of a busy street. Jake very nearly shoots the driver that almost ran over Oy, but was stopped by the efforts of Callahan and the Rev. Earl Harrigan. Jake cools down and is able to find the hotel where Susannah/Mia left Black Thirteen. They attempt to remove it safely, but it awakens and forces them both to their knees, urging them to murder each other. They almost succumb, but Callahan uses his restored faith to put the orb back to sleep and save their lives.

In search of a safe storage place, he and Jake move Black Thirteen to a long-term storage locker underneath the World Trade Center, with the hope that either it will stay dormant or Roland will at some point come to destroy it. They go to the Dixie Pig, the restaurant stronghold of the Low Men and vampires where Susannah is being held, where they find the sköldpadda and prepare to ambush the forces within.

Add a photo to this gallery
Retrieved from "https://darktower.fandom.com/wiki/The_Dark_Tower_VI:_Song_of_Susannah?oldid=19299"
Community content is available under CC-BY-SA unless otherwise noted.