Wolves of the Calla 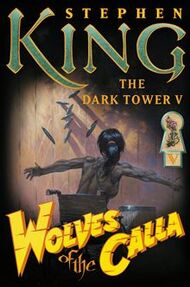 Wolves of the Calla is the fifth book in The Dark Tower Series, published in 2003. The subtitle for this book is RESISTANCE. The book is heavily influenced by Akira Kurosawa's Seven Samurai and John Sturges' The Magnificent Seven. In fact, Sturges was the source of the name, Calla Bryn Sturgis.

After leaving the Emerald City, Roland Deschain and his ka-tet approach Calla Bryn Sturgis. Eddie Dean and Jake Chambers are taken todash while Roland follows Susannah/Mia as she feeds her growing child. Eddie and Jake discover that the rose is in trouble. Calvin Tower, the man who owns the vacant lot, is being pressured by Jack Andolini and Enrico Balazar into selling it to the Sombra Corporation.

A group of people approach the tet, and a former priest, Donald Callahan comes to talk with them. They learn that roughly every twenty-three years, the Callas are raided by Wolves, which turn out to be robotic soldiers serving the Crimson King. These Wolves steal half of the Calla's children and bring them to Thunderclap, who return a few months later "roont". "Roont" (ruined) children are sterile, mentally handicapped, grow to be larger and stronger than other children, and finally die in pain at a young age.

After their first night in Calla Bryn Sturgis, Roland, Susannah, and Eddie hear the story of Father Callahan. After fleeing 'Salem's Lot, Callahan arrives in New York City, and becomes a vagrant. Now able to sense vampires, he realizes that they live and hunt all around him and he begins to kill them after a friend is attacked. This attracts the attention of the Crimson King and his soldiers, the "can-toi". He first notices this attention when he sees graffiti and lost pet posters that refer to him. The Hitler Brothers are hired to find Callahan. They torture and kill another friend in the hopes of finding Callahan. They later attack Callahan and carve a cross on his forehead, intending it to become a swastika. But before they can finish, Callahan is rescued by Calvin Tower and Aaron Deepneau. After this, Callahan is lured into a building by Richard Sayre, a low man, and several vampires. Rather than be infected, he jumps out a window and dies. After his death, he wakes up in the Way Station, where he encounters Walter o'Dim who gives him Black Thirteen. Walter apparently does this in hope that it will kill Roland later in his journey. Black Thirteen transports him to the Doorway Cave outside Calla Bryn Sturgis, where he begins a new life where he tries to find redemption by teaching the locals his religion.

Before Roland prepares for the battle with the Wolves, he realizes that the rose and the vacant lot must be protected because time in New York City travels faster than it does in his world. Eddie travels through the door in Doorway Cave with the aid of Black Thirteen. He arrives just in time to prevent Andolini from torturing Tower. Eddie warns Tower that Balazar will send men to get him, so that Tower will get out of New York. Tower refuses to leave until he sends some of his most precious books back to Roland's world for safe-keeping, but in the end he relents and leaves.

Roland convinces the town to allow them to try and defeat the Wolves. Preparations for the arrival of the Wolves is complicated by the presence of traitors in the Calla, the robot, Andy, and the father of Jake's new friend, Ben Slightman the Elder. These traitors communicate with Finli O'Tego through the Dogan, an outpost made by North Central Positronics. Before the Wolves come, Andy is confronted and deactivated and Ben Slightman promises to help on the day of the attack.

On the day that the Wolves come, the ka-tet is joined by several Sisters of Oriza. Jake, the Tavery twins, and Ben Slightman the Younger create a false path leading to where the children of the village are supposed to be hiding. Matters become more complicated when the Tavery boy breaks his ankle. The group of children is slowed down and cannot make it back to safety. They are forced to hide in the trench where Roland waits to ambush the Wolves. The Wolves are defeated with the help of the ka-tet, but not before Margaret Eisenhart and Ben Slightman the Younger are killed.

Susannah's personality becomes subsumed by Mia's and escapes via the Doorway Cave with Black Thirteen during the celebration festivities. There, Callahan discovers a copy of the novel, Salem's Lot, causing him to question his reality. The novel ends with the ka-tet unsure of how to follow Susannah back to New York City.

Add a photo to this gallery
Retrieved from "https://darktower.fandom.com/wiki/The_Dark_Tower_V:_Wolves_of_the_Calla?oldid=19298"
Community content is available under CC-BY-SA unless otherwise noted.