Start a Wiki
Wizard and Glass 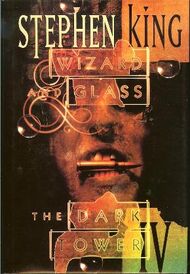 Wizard and Glass is the fourth book in Stephen King's The Dark Tower Series. The book's subtitle is REGARD, fitting with the other "R" subtitles that appear in all of the books. The majority of the book is told in flashback, chronicling the story of Roland's first love.

The book begins with the riddling contest between Roland's ka-tet and Blaine the Mono. Blaine is able to answer every riddle posed to him without pause. He answers Roland's Fair Day riddles and all of the riddles from Jake's book, Riddle-De-Dum. Eddie is the one who finally stumps Blaine. He uses the jokes that Roland had previously declared "unworthy" and foolish. Blaine's mechanical brain is fried from the effort involved in answering the jokes. Blaine continues down the tracks, but slows down enough for the group to survive the impact.

The group wanders into the city of Topeka and realizes that everyone is dead of the superflu or "Captain Trips" (a reference to The Stand). Eddie finds a new wheelchair for Susannah and they discover that this Topeka is subtly different from their own. There is a baseball team called the Kansas City Monarchs, a car named the Takuro Spirit, and the soda brand Nozz-A-La. They also realize that they have left the Path of the Beam. Their only choice is to continue in the same direction that Blaine was heading, along I-70. There is a thinny along the road that reminds Roland of the one he encountered before in Mejis. Night falls and Roland tells them his story

The story that he tells them is the story of his lost love, Susan Delgado, and his first ka-tet. Roland is sent east from Gilead with Cuthbert and Alain after his early test of manhood. He was sent away in order to prevent him from being killed by Marten Broadcloak. The three boys travel to the town of Hambry, in the Barony of Mejis, and use the names Will Dearborn, Arthur Heath, and Richard Stockworth. There, Roland meets Susan Delgado, the "lovely girl at the window."

The group is tasked to count goods, goods of all kind that the Affiliation may need in the fight against John Farson. They quickly realize that all is not as it seems. The presence of mercenaries known as the Big Coffin Hunters is strange for such a small town and there are far more horses than they have been told to expect.

Meanwhile, Roland's and Susan's love grows. Susan breaks her promise to Mayor Thorin and her aunt, Cordelia Delgado, to remain a virgin until she goes to his bed as his gilly. They sleep together and Rhea of the Cöos nearly ruins all with her hypnotic suggestion to Susan. She had told Susan to cut off all her hair after she loses her virginity, but Roland was able to prevent her from doing so. Rhea does eventually discover their affair and sets out to get her revenge upon Susan.

Mayor Thorin is murdered by Roy Depape who leaves Cuthbert's bird skull known as "The Lookout" at the scene. Roland and his ka-tet are arrested and taken to jail for killing Thorin, but they manage to escape with the help of Susan. The ka-tet sets out for a battle against Farson's men. Roland tells Susan to hide with Sheemie in a hut in the Bad Grass and wait for his return. If he does not return, she is to take his guns to his father and tell him what happened.

Roland's plan has two stages, ambush the convoy led by the Big Coffin Hunters to take the pink bend and lead Latigo into a trap in Eyebolt Canyon. Roland and his tet spot the convoy heading towards Citgo and they fall in behind them. Cuthbert silently picks off several men with his slingshot. Once one of the riders notice the attack, Roland and Alain start picking off the rest. Depape is killed in the battle and Roland personally kills Eldred Jonas, the failed gunslinger, and recovers the glass ball.

After that, they head towards Latigo's encampment. Alain uses the machine gun he got from Fran Lengyll to kill many of the men and light the tankers on fire. Then, they broke off their attack and headed towards Eyebolt Canyon. Roland successfully lured Latigo and his men into the canyon and then lit the brush in front of the entrance to trap them in. Cuthbert and Alain were almost caught in the thinny before Roland snapped them out of it. The tet escaped by climbing out, leaving Farson's men to die.

While waiting for Roland, Susan is discovered by The Big Coffin Hunters and is taken back to town by Clay Reynolds. Susan is held prisoner at Mayor Thorin's house, but is freed by Olive Thorin. Her attempt to escape is futile, though, as she is captured once more by Rhea, who had previously seen her escape in the glass. She is then taken through town and burned as a Reap Day sacrifice in a public display.

Roland sees all this in the Wizard's glass and is devastated, blaming himself for Susan's death. He does not say a word while Cuthbert and Alain bring him back to Gilead.

Roland is able to tell his story in one night. When he is done, it is morning and the tet continues down I-70 and reaches the Emerald City, a city remarkably similar to the one from The Wizard of Oz. It is here they encounter Andrew Quick, posing as Oz, and Randall Flagg, who departs as Roland tries to kill him with Jake's Ruger. Flagg leaves Maerlyn's Grapefruit in his place. Roland takes his tet into the glass to show them the story of what happened when he returned to Gilead. He looked into the pink glass before he returned it to his father, Steven Deschain. He discovered a plot involving his mother, Gabrielle Deschain, to kill his father. He goes to her to give her the choice of exile or repentance. It is unknown which one she would have chosen because Roland was tricked by The Grapefruit into believing that she was Rhea, and accidentally killed her. She was carrying a belt that she had made for Roland, presumably as a peace offering.

When the tet leaves the glass, they find themselves miles past the Emerald City. They continue on towards the land of Thunderclap.

Start a Discussion Discussions about The Dark Tower IV: Wizard and Glass