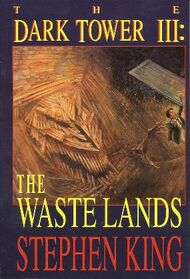 The Dark Tower III: The Waste Lands is the third novel in Stephen King's The Dark Tower Series. The subtitle of this book is REDEMPTION.

After the events of The Drawing of the Three, Roland Deschain and his ka-tet travel through the Great Western Woods . During this time, Roland is training Eddie and Susannah to be gunslingers and Eddie is rediscovering his talent in wood-carving. However, the ka-tet is not alone in the woods. Shardik, the bear guardian of one of the Beams, has gone insane and wants to rid the woods of the "troublesome fire starters".

Shardik finds Eddie alone and chases Eddie into a tree. Roland and Susannah rush to get to Eddie and find Shardik attempting to shake Eddie free. In the first real test of her newly taught gunslinger skills, Susannah has to shoot the metal "thinking cap" on the bear's head. She succeeds in killing the bear. Following the creature's back trail, they find the beginning of the beam and start on their path to the Dark Tower.

Due to Roland's interference with Jake Chambers' death in The Drawing of the Three, both Roland and Jake suffer from the ensuing paradoxes in their minds. Roland remembers meeting Jake at the way-station and letting him fall under the mountain, but he also remembers seeing no one at the way station. Both Jake and Roland realize they're going slowly insane. Roland, with the help of his new companions, Eddie Dean and Susannah Dean, find a way to "draw" Jake out of 1977 through a speaking circle, a Stonehenge-like monument inhabited by a demon. Susannah has to distract the demon by having sex with it. Eddie must confront his anxieties and complete the wooden key he has been carving. Jake also must deal with a deadly sentry himself. The emotions and trials that Jake faces while confronting the doorkeeper mirror not only Eddie's frustration but also Susannah's sexual triumph and edification as he is born into Mid-World. Eddie finally manages to complete the key and Roland pulls Jake into his world. The second he re-enters Mid-World, both Roland's and Jake's minds become stable again. The group continues along the Path of the Beam. Along the way, Jake meets a billy-bumbler that he names Oy, who becomes a permanent part of their ka-tet.

Along the Great Road that they have been travelling upon, they find the town of River Crossing. The buildings are run-down and covered in graffiti saying "Pubes die." The town turns out to be inhabited after all, by a bunch of old folks. There they learn the history of the city of Lud and the existence of a Blaine the Mono, that can take them across the Waste Lands. Before they leave, the leader of the town, Aunt Talitha, gives Roland a cross to lay at the base of the Dark Tower when he gets there.

Roland and the ka-tet attempt to cross into Lud along a decaying bridge. While they are busy navigating a tricky section, Gasher sneaks up and grabs Jake. He threatens to blow up the bridge with a hand grenade unless they let him leave with Jake. They let him go and Gasher runs back to the Tick-Tock Man's base in the under-works of Lud with Jake, navigating through several traps. Tick-Tock means to re-educate Jake and use him in his plot to conquer Lud. Roland and Oy follow after them and soon come upon the base. They cause chaos in the base and in the struggle, Jake manages to shoot Tick-Tock in the head and they leave him for dead. However a man with the appearance of a gunslinger who calls himself Richard Fannin tells the Tick-Tock man that his work is not finished and then they leave the dying city together.

Meanwhile, Susannah and Eddie go in search of Blaine the Mono. They come across the section of the city inhabited by the Pubes. They see bodies of people hung from lamp-posts and realize that the Pubes hang one of their own every time the god-drums play. Eddie and Susannah stumble across the remnants of the Pubes who promptly attack them. After a number of Pubes are killed, the rest surrender and volunteer to lead Eddie and Susannah to the Cradle of Lud, where Blaine the Mono can be found. When Roland and Jake are reunited with them, Blaine sets a sequence in motion to release nerve gas on Lud. The ka-tet is forced to solve a riddle before they are allowed to board Blaine. Susannah, using Detta's memories, is able to solve it just before the gas is released. Upon boarding the suicidal monorail, Blaine takes the ka-tet along the rails into the the Wastelands, a terribly poisoned land. There they are condemned to death by Blaine. Roland is able to convince Blaine to let them live if they beat Blaine in a riddling contest.

Turkish Cover
Add a photo to this gallery
Retrieved from "https://darktower.fandom.com/wiki/The_Dark_Tower_III:_The_Waste_Lands?oldid=19294"
Community content is available under CC-BY-SA unless otherwise noted.