Start a Wiki
The Drawing of the Three 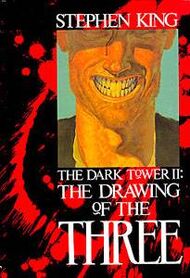 The Drawing of the Three is the second book in the Dark Tower series. It was published in 1987. The subtitle of the book is RENEWAL.

On a beach, Roland encounters three magical doors to our world, hanging in mid-air. Through one door, Roland encounters Eddie Dean, a junkie transporting cocaine on an airplane for crime boss Enrico Balazar. Through another door, Roland encounters Odetta Holmes, a sophisticated and wealthy black woman who suffers from multiple personality disorder; her alternate identity, Detta Walker, is a crude and cruel but street-wise woman. Following a prophecy that such doors would provide companions for his quest to the Dark Tower, Roland brings Dean and Odetta -- both reluctant -- into Mid-World. Instead of revealing a new companion, the third door (labeled "The Pusher") instead reveals a new adversary for Roland: Jack Mort, a sociopath who takes sadistic pleasure in injuring and killing random strangers — and the man responsible for the head trauma that created Odetta Holmes's alternate personality, the loss of Odetta/Detta's legs, and the death of Jake Chambers. Mort's murder of Jake led to Jake's appearance in The Gunslinger. Roland's decisions while dealing with Mort are crucial to later events in the series. The encounter results in the death of Jack Mort and the fusing of the personalities of Odetta and Detta to form a third woman, who will thenceforth be called Susannah. Although the Gunslinger does not bring "The Pusher" with him into his own world (as might be guessed based upon what has happened regarding the previous two doors), his quest for the Dark Tower is not lost, because Roland does draw his third. His third is Susannah Dean; the result of Odetta and Detta's fusion of minds.(1977)

Through his actions both in his world, and in Eddie, Susannah, and Jack Mort's world, Roland saves Eddie and Susannah.  He saves Eddie by curing him of his addiction and bringing Susannah, whom Eddie loves.  He saves Susannah by helping her fuse her former personalities, Odetta Holmes and Detta Walker, into a stronger single personality, Susannah Dean.  Both owe their lives to Roland, and Roland is acutely aware that he may need to sacrifice them to reach the Tower.

Each of these people is essential for Roland to continue his quest. They are all part of a ka-tet, defined as "one made from many" and "sharing the same destiny."

Add a photo to this gallery
Retrieved from "https://darktower.fandom.com/wiki/The_Dark_Tower_II:_The_Drawing_of_the_Three?oldid=20290"
Community content is available under CC-BY-SA unless otherwise noted.