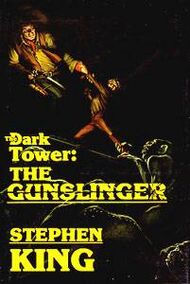 The Gunslinger is the first installment of The Dark Tower Series written by Stephen King. The book was originally published June 10, 1982. The story centers on Roland Deschain and his pursuit of the Man in Black. The subtitle of this book is RESUMPTION.

The first novel of the series begins seemingly in the middle of the story, following Roland Deschain, the last gunslinger. The novel is set in All-World.

Retrieved from "https://darktower.fandom.com/wiki/The_Dark_Tower_I:_The_Gunslinger?oldid=20778"
Community content is available under CC-BY-SA unless otherwise noted.