The Wind Through the Keyhole 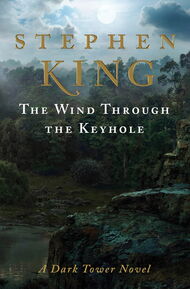 The Wind Through the Keyhole is a novel written by Stephen King and considered to be in between the fourth and fifth books of the Dark Tower series. It is a stand alone novel and delves into another story in Roland's life. As of now there is no subtitle, unlike the others that follow a trend of having subtitles starting with R. The majority of the book is told as if Roland is telling the story.

The story begins with the Ka-tet just leaving the Emerald City behind. They are traveling towards Thunderclap and along the beam. As they get closer they meet an old man named Bix who seems to have a previous affiliation with Oy. Bix then warns them about an upcoming Starkblast and warns them to find shelter. He takes them on a raft across a river blocking their path.

After they leave they seek out shelter and find an abandoned town. There they explore the town hall and figure it is good enough for their needs. They then start to make preparations to get ready and wash off. Jake and Roland continue retrieving wood to make sure they have enough warmth so they can survive the storm and Eddie and Susannah wash off the Starkblast rolls in. Oy is stuck outside and Jake barely grabs him before he is flung into the town hall. They decide to pass the time Roland should tell a story, and he obliges.

Shortly after killing his mother and the whole incident in Hambry, Roland has to go to Debaria with a fellow gunslinger, Jamie De Curry. They are to stop a rampaging Skin-Man. When they get to the town they are disrespected by most of the citizens. They work with the sheriff to figure out some leads but have none. Later that night a farm is attacked by the Skin-Man. Everyone is dead except for a young boy named Bill Streeter and a few others. Bill's father is killed by the Skin-Man who takes the shape of a giant Bear. They find tracks and figure out one important fact. That the Skin-Man can ride a horse and that he is a miner. They then learn that he has a tattoo of a blue ring around his ankle.

After this Roland takes the young Bill with him to the town jail and calms him down and tells him a story called The Wind Through The Keyhole. The story starts off about a boy named Tim Ross suffers a tragedy when his father Big Ross is killed by a dragon. A few months later his mother, Nell, marries his fathers best friend, Big Kells, so they can pay the Covenant Man their yearly taxes. Things start going wrong when Big Kells starts to beat Tim's mom. It starts to get worse until tax time comes and the Covenant Man gives Tim a magical key that can open any lock. Tim opens Big Kells chest and finds his fathers axe and his fathers lucky coin. Enraged, Tim goes to talk to the Covenant Man who is in the endless forest. Once he gets there he the Covenant Man shows him the body of his father and shows a vision of Big Kells beating his mother until she is blind.

After this he runs home and checks on his mother who is aided by his previous teacher Widow Smack. He vows for revenge. Big Kells has disappeared and Tim wants to help his mother so he seeks out the Covenant Man again but only finds his wand. But he is able to see a man giving him an item that will help his mothers vision. It turns out it is Maerlyn, a powerful wizard. Tim tells Widow Smack of his plans and she warns him not to go but she gives him a rifle because she knows she cannot convince him otherwise. Tim then sets out into the endless forest to find Maerlyn.

Along the way he is tricked by a sighe who leads him onto an island where he is almost killed by a dragon, alligators, and is being jeered on by Mudmen across the lake. He finally kills an alligator with his rifle and the Mudmen then believe he is a gunslinger. They help him off the island and give him a device from the old people. Tim then uses the device to lead him towards Maerlyn. Along the way he sees a dozen Billy-Bumblers doing a routine that they did when a starkbalst was near. He rushed to his destination and found a Tyger with a key around its neck. He was to kill the Tyger if he wanted access to a place of shelter. Instead he saved the Tyger and Tyger showed him a magic piece of cloth that grew and shielded them from the starkblast. He also picked up a feather and a bottle. After the Starkblast the Tyger urged Tim to drip some of the liquid in the bottle into his mouth. After Tim did so the Tyger turned into Maerlyn. Maerlyn told him to use the rest on his mother and to give her his father's axe immediately after. He was then flown home by the use of the feather and the cloth. Once home he gave his mother the antidote and his father's axe. She was cured and Tim went downstairs to tell Widow Smack. He thought she was asleep but she actually had her throat slit. Tim was about to scream when Big Kells started to choke him. Just as Tim thought he would die, his mother cut Kells's head open with the axe.

After Roland had finished they lined up all the suspects. They took the ones with the blue ring on their ankle and took them to jail. They then found out who the Skin-Man was but he turned into a giant snake and killed a few people before Roland put a bullet in his head. And that concluded Roland's story.

The Ka-tet waited a few more days and then continued on towards Thunderclap.

Add a photo to this gallery
Retrieved from "https://darktower.fandom.com/wiki/The_Dark_Tower:_The_Wind_Through_the_Keyhole?oldid=20593"
Community content is available under CC-BY-SA unless otherwise noted.