The Battle of Tull 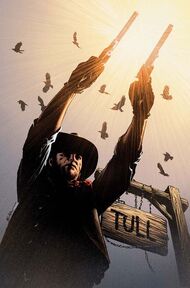 The Battle of Tull was first published on June 1, 2011 with the last issue being published on October 5, 2011; there are five issues. The hardback version was released on January 25, 2012 in Canada and is due for publication on July 25, 2012, in the U.S., containing the entire comic collection. This series of comics take place after The Little Sisters of Eluria (an unknown time after). It is the first comic to be based on the actual novel series, in this case The Battle of Tull mentioned in The Gunslinger.

Roland comes to Tull and meets Allie, a bartender, who in exchange for sex, gives Roland information on the Man in Black and Nort, the local devil-grass eater raised from the dead. Meanwhile the Man in Black already has the local preacher, Sylvia Pittston, believing that Roland is the Interloper.

Retrieved from "https://darktower.fandom.com/wiki/The_Battle_of_Tull?oldid=11487"
Community content is available under CC-BY-SA unless otherwise noted.