The Battle of Jericho Hill 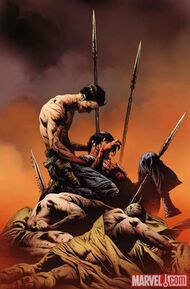 The Battle of Jericho Hill was first published on December 3, 2009 with the last issue being published April 21, 2010; there are five issues. The hardback version was published September 1, 2010 containing the entire comic collection.

Seven years have passed since the events of The Fall of Gilead and Roland Deschain struggles to maintain the last remnants of The Affiliation.

The comics recount their final betrayal by Randolph after he betrays them to Marten Broadcloak hoping to have his family returned to him and so the agents of John Farson the Troitans, Slow Mutants and Kuvian Night Soldiers.

The following battle that ensues causes the death of everyone, including the deaths of Cuthbert Allgood, and Alain Johns, as well as many others. Roland is also caught in the cross fire, but is spared death, however Marten believes he has died in the battle.

Retrieved from "https://darktower.fandom.com/wiki/The_Battle_of_Jericho_Hill?oldid=20937"
Community content is available under CC-BY-SA unless otherwise noted.