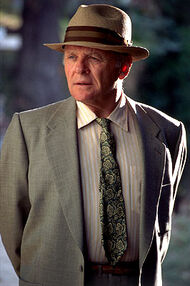 Ted Stevens Brautigan was a Breaker with telepathic powers. He was a Facilitator which boosted the powers of all nearby telepaths. He was considered the most valuable Breaker because he was the only Facilitator the low men had ever recruited.

Ted made his first appearance in Stephen King's works in Hearts in Atlantis. He was on the run from the low men, after escaping from Algul Siento with help from Sheemie, when he met Bobby Garfield, a young boy in Connecticut. Eventually, the low men catch up with him and Ted agrees to go with them if they leave Bobby alone.

After Roland Deschain and his ka-tet came to Algul Siento, Ted, along with Dinky Earnshaw and Sheemie, help the gunslingers destroy the Devar-Toi where the Breakers are being held. When the compound was destroyed, Ted and a few other Breakers head towards the Callas in search of redemption.

He is mentioned in the novel Black House to be the Crimson King's Chief Breaker by the character Mister Munshun.

Retrieved from "https://darktower.fandom.com/wiki/Ted_Brautigan?oldid=19237"
Community content is available under CC-BY-SA unless otherwise noted.