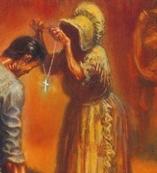 Talitha gave her cross to Roland to lay at the base of the Dark Tower. It was given to John Cullum to act as a sigul and was later returned to Roland by Moses Carver.

When Roland came to the Dark Tower, Talitha Unwin was one of the names that he called out and he remembered to place her cross at its base.

Retrieved from "https://darktower.fandom.com/wiki/Talitha_Unwin?oldid=14786"
Community content is available under CC-BY-SA unless otherwise noted.