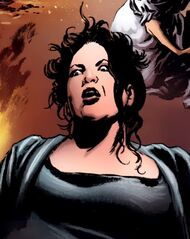 Sylvia Pittston is a preacher woman who comes to Tull, twelve years before Roland Deschain reaches the town. Outwardly her religion appears to be a version of Christianity, worshipping the "Man Jesus" and modeled after the pentacostal hellfire and brimstone preaching styles of some churches in the American Old West, but had lately come under the corrupting influence of the Man in Black. Shortly after Roland enters the town, she begins warning her congregation to be wary of "The Interloper", a thinly veiled reference to Roland himself.

She is described as being big and attractive, and Roland feels some lust for her, as do most men that come to know her.

According to Coral Thorin, Sylvia had once stopped by the town of Hambry to preach. In Tull, Sylvia was impregnated by the Man in Black and was led to believe that her unborn child was that of the Crimson King himself. Roland performed an abortion on the demon-child (though the precise details of the act are left somewhat to the imagination, but it is implied Roland presses his gun into her vaginal tract) and Pittston, out of vengeance, provoked the entire population of the town to attack Roland in an attempt to kill him in The Battle of Tull. She was shot to death in the resulting battle.

Retrieved from "https://darktower.fandom.com/wiki/Sylvia_Pittston?oldid=19716"
Community content is available under CC-BY-SA unless otherwise noted.