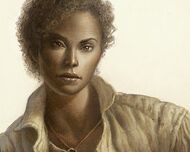 Status
Alive
Appearances
The Drawing of the Three


The Dark Tower
Mentioned
The Gunslinger

“The lady of shadows, does she look two faced to you Gunslinger?”
— Walter O'Dim

Odetta Holmes was the only child of Dan and Alice, a wealthy black couple, from New York City.

At the age of five, serial killer Jack Mort dropped a brick on Odetta's head, causing her to be in a coma. Out of this traumatizing incident, Odetta's damaged mind created a completely separate second personality named Detta Walker.

The two personalities end up being poles apart. Odetta is a morally righteous intellectual with a significant level of education and class who participates in civil-rights protests. Detta is a violent, base individual ruled by sexual desire and fueled by hatred towards the white people Odetta passively resists. However, the two personalities are completely unaware of each other's existence.

Twenty years later the same man, although possibly unaware of the coincidence, attempted to kill Odetta again by pushing her in front of the A-Train at Christopher Street Station. At the last second, a man pulled her out of the way, although her legs were severed by the train, placing her in a wheelchair for the rest of her life.

At that point, the Detta Walker personality began to assert more control over their shared mind. For the three years following the loss of her legs, Odetta experienced periods of blankness, which her intellect fills in with fictional events. Detta, too, suffers the same effects when not in control, but she at least realizes periods of time are missing, though she chooses to ignore this in favor of following her desires. This behavior persists until Roland Deschain "draws" Odetta/Detta into Mid-World from New York City in 1964.

When Roland Deschain enters the door to 1964 and drags her into Mid-World, Detta Walker is in control and responds in a hostile manner, calling him a "honky mahfah". Odetta Holmes's personality finally wakes up and tries to dismiss the whole incident as a dream, but eventually realizes the reality of the situation and becomes depressed and hysterical. She eventually finds friendship and love in Eddie Dean, another person drawn from her world; however, the relationship is restricted by Detta's personality who hates him utterly.

Detta takes over and escapes when Roland travels through the third door into the mind of Jack Mort. Eddie is left alone in the darkness with Detta, who intends to murder him and Roland. She eventually holds Eddie up with Roland's gun and ties him up in ropes. She leaves him on the beach to get eaten by lobstrosities.

Roland (in Mort's body in Detta's world) realizes a way to save Odetta's life, and brings Mort down to a subway station. He calls for both Odetta and Detta to look into the doorway out of Mort's eyes. When they both look into the doorway, they see each other for the first time and both have combined memories of Mort dropping the brick on their head and then being pushed in front of the train. This has the effect of blending the personalities together, creating Susannah Dean (Susannah as it was both their middle names, and Dean as she is married to Eddie by ka).

Throughout the rest of the series, Susannah remains Eddie's lifelong love and one of Roland's faithful companions. Being a merging of the "good" Odetta and the "bad" Detta, Susannah seems closer to Odetta. This "good" part of her former personalities never reappears again in the novel. On the other hand, the "bad" Detta is often called to the rescue when Susannah needs to be a little tougher to deal with evil powers such as the demon of the speaking ring in The Waste Lands or Mia in Song of Susannah.

At the end of the last novel, The Dark Tower, Patrick Danville draws Susannah a door to "happiness" (Unfound Door) and she travels through it. She ends up in a version of New York, meeting the twinners of Eddie Dean and Jake Chambers (now brothers, named Jake Toren and Eddie Toren). Eddie confides in her that he and Jake had each dreamed of her, and that he believes he is falling in love with her.

She is the only member of Roland's ka-tet not to have died at some point throughout the series.

Add a photo to this gallery
Retrieved from "https://darktower.fandom.com/wiki/Susannah_Dean?oldid=20175"
Community content is available under CC-BY-SA unless otherwise noted.