Start a Wiki
“If you love me... then love me.”
— Susan
Susan Delgado 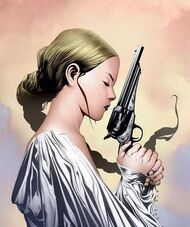 Susan Delgado is Roland's first and only true love whom he meets in the town of Hambry in the book Wizard and Glass, but is mentioned prominently in The Gunslinger as "the lovely girl at the window."

She was tall for a girl, with bright grey eyes and golden hair that hung nearly to her hips and often wore her father's clothes to the annoyance of her aunt, Cordelia.

As a child she was raised by her father and became a tomboy, following her father around at work whenever he would let her. She strove to live with Cordelia when, for her father's sake, she moved in with them.

She was distraught after learning of her father's death and reluctantly agreed to bear the mayor's heir so they could remain on the land where they lived. She soon realized, however, that the mayor wanted a long term mistress, or gilly, and began to resent her aunt for the arrangment.

We first encounter Susan Delgado on her way to meet with Rhea of the Cöos so the old witch can "check her honesty" (her virginity) therefore allowing Susan to fulfill the obligation under which her Aunt Cordelia placed her: to become mayor Hart Thorin's mistress. She believes she is meant to be a surrogate mother for his child since his wife is barren, but Rhea advises her that the mayor is more interested in the planting than the cultivating of his seed.

Roland first meets Susan on the road back to town from Rhea's home. At this time, Roland is 14 and Susan is 16. Despite their hesitation to begin an affair, their mutual attraction proves too much to overcome and they begin meeting in secret using a variety of methods to communicate with one another. Roland's friend suspects the affair and nearly causes a fight between Roland and a now jealous Cuthbert.

Rhea uses Maerlyn's Grapefruit and discovers their relationship. The Big Coffin Hunters capture Susan while hiding in the Bad Grass and lock her inside the mayor's house. Sheemie, with the help of Olive Thorin, is able to free her from her cell. Rhea informs Cordelia of this and recaptures her on the outskirts of town. The town brands Susan a traitor and burns her alive as a Charyou Tree sacrifice. Roland, having killed Eldred Jonas and obtained Maerlyn's Grapefruit, watches her death through the sphere.

Susan appears very briefly during The Long Road Home when Roland flees Hambry carrying her charred and lifeless body. When Roland's soul is trapped inside Maerlyn's Grapefruit, her body is abandoned. An illusion of her appears within the sphere to torment Roland with repeatedly experiencing the scene of her death.

Retrieved from "https://darktower.fandom.com/wiki/Susan_Delgado?oldid=14665"
Community content is available under CC-BY-SA unless otherwise noted.