Steven Deschain, also known as Roland the Elder in the original version of The Gunslinger, was a gunslinger and the father of Roland. He was the twenty-ninth generation descendant of Arthur Eld, through Emmanuelle Deschain and was a member of the Tet of the Gun. He was the "dinh" of the City of Gilead and leader of the gunslingers, prior to revolution led by John Farson and was the last Lord of Light carrying the Horn of Eld.


He is tall and thin with a heavy handlebar moustache and rarely shows his emotion, although it is clear he is deeply attached to his son Roland. He often says to his closest companions he could not survive the death of his son. Until his son, Steven was the youngest ever to best his instructor being sixteen at the time.

An assassination attempt was once made on his life by someone bearing the same tattoo as the Big Coffin Hunters. At some point before Roland fulfilled the test of manhood, he is said to have been in the west in Cressia pursuing the evil of Farson. When he returns he orders the arrest of Marten Broadcloak, however Marten escapes.


He was cuckolded by his wife, Gabrielle, who slept with Marten. He knew about the affair for two years without doing anything. His wife was involved in the plot to kill him but she never attempted to murder him.

Steven decided to send Roland away to protect him from Marten Broadcloak. The father and son had a talk one day after Roland became a gunslinger, and Roland said that he saw Gabrielle and Marten together in the bedroom, probably after an intercourse.  Steven told Roland that he had known for two years. Steven told his son to choose two of his friends to go with him, and Roland chose Alain Johns and Cuthbert Algood, despite Steven's recommendation to not choose the latter. In Mejis, Roland had a flashback of his father explaining to him the power of John Farson, in which he told the three boys the possibility of John having part of the Wizard's Rainbow.

After his son returns from Mejis he receives the Pink Sphere and slowly becomes obsessed with it, however he manages to break free from its grasp. It is through him the demon inside it learns of Marten's affair with his wife. He also tried to keep Arra Champignon and her husband in Gilead where they will be safe, though they politely decline.

Steven with Abel Vannay and Cort realize Kingson was here for Maerlyn's Grapefruit, Steven then realizes Gabrielle stole the key to his safe from him. He goes to find his safe empty and goes to confront her, finding her dead body with Roland next to her. He is then informed a raven was seen with the orb and John Farson fleeing and that Kingson's body is missing. He instructs his son to be arrested for murder and states that he, Christopher Johns and Robert Allgood pursue them. They follow him but come to a dead end and on their return are attacked by a group of Slow Mutants and Robert dies. He helps Christopher carry back the body and is the one to tell Cuthbert Allgood of his fathers death. Under the information from Justus he and the gunslingers go to attack Farson head on being told he is currently not in a position to fight back, this is a lie and they are all killed except for himself and Christopher. Upon arriving back to Gilead he orders the city to be sealed and goes to find the Gilead City Plans, one of Gilead's Guards turns up and in the ensuing fight they both die. Roland then finds the City Plans, Steven leaving one final message 'open the pits.' Steven's sandalwood guns were passed on to Roland after his death. 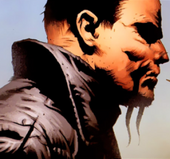 Add a photo to this gallery
Retrieved from "https://darktower.fandom.com/wiki/Steven_Deschain?oldid=20236"
Community content is available under CC-BY-SA unless otherwise noted.