Start a Wiki
Stephen King's The Dark Tower: A Concordance 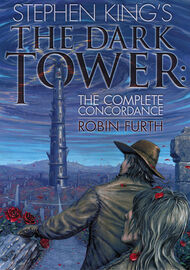 Stephen King's The Dark Tower: A Concordance is a two-volume encyclopedia-style collection of information related to Stephen King's The Dark Tower Series. Robin Furth, the author, originally wrote this for King's use only, to catalog all the references to avoid continuity errors. However, King decided that it would be valuable and interesting to his "Constant Readers", hence its publication.

Following the release of The Wind Through the Keyhole, Robin Furth published the "Complete Revised" Edition to contain material from that novel as well. The book chronicles all characters, locations, events, and terms used in the series. It also has appendixes, group study questions, connections to King's other works, as well as maps.

Retrieved from "https://darktower.fandom.com/wiki/Stephen_King%27s_The_Dark_Tower:_A_Concordance?oldid=10777"
Community content is available under CC-BY-SA unless otherwise noted.