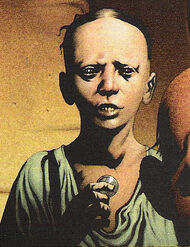 
The Battle of Jericho Hill
Mentioned

Stanley "Sheemie" Ruiz is a mentally handicapped character in Stephen King's The Dark Tower Series, introduced during Roland's tale of his boyhood in Mejis. While at first appearing to be nothing more than the victim of abuse by other citizens of Hambry, there is more to him than meets the eye.

Sheemie worked at The Traveller's Rest doing whatever jobs he could. The bartender of the establishment, also named Stanley Ruiz, reflects that nobody really knows who Sheemie's father was and that it might have even been himself. Sheemie's life took a turn for the less mundane when the teenagers Roland, Cuthbert and Alain rode into town under aliases on a mission ordered by Roland's father Steven Deschain. When Roy Depape, one of a trio of assigned enforcers locally known as the Big Coffin Hunters, decided to torment and threaten Sheemie one night, Cuthbert sprang to Sheemie's rescue by getting the drop on Depape. The subsequent involvement by Clay Reynolds, Alain, Eldred Jonas and finally Roland himself resulted in an awkward stalemate that only the sheriff's arrival was able to break. From then on, Sheemie hero-worshipped the three young men, and Cuthbert in particular, with the loyalty of a puppy. He even managed to make himself useful when he aided in a rescue of Roland's love Susan Delgado. Unfortunately, Susan was recaptured and executed very soon afterwards.

Sheemie follows Roland, Cuthbert and Alain when they are fleeing Hambry still upset with himself for allowing Susan to die, he loses the three men and ends up at the Dogan in the west of Mejis. Here he accidentally re-activates a Psychic Enhancer Assistant, which gives him his psychic powers. He teleports himself over Xay River Canyon and eventually finds the three men. He heals Alain's injuries sustained from mutie wolves and enters Maerlyn's Grapefruit to save Roland's soul which has become trapped inside it. He doesn't come out.

Sheemie arrives at Gilead but is not allowed to enter and so teleports into the city, having to hide as Gilead's Guards now search for him thinking he is one of the Not-Men. Hiding, he is attacked by Slow Mutants but he is saved by Alain and Cuthbert and is then given food in the kitchens of Gilead Castle.

The Battle of Jericho HillEdit

Roland later mentions within the Book Series that when he and his ka-mates had first gone questing after the Tower, Sheemie had gone with them as a sort of squire. At that point he falls silent, giving the impression that Sheemie met with a bad end.

In actuality Sheemie nearly died during a Beam-Quake but is saved by Alain. The manifestations of the Beams visit him in a dream and tell him they are weakening; it is when he tells Roland this that he decides to venture to the Dark Tower to stop them from falling. He is finally betrayed by Randolph and given over to Marten Broadcloak due to his powers; Sheemie tries to warn Roland about Randolph using Maerlyn's grapefruit but is unsuccessful.

In the land of Thunderclap Roland's ka-tet encounter three men, one of whom, introduced by the others as "Stanley", possesses a remarkable power - the ability to teleport himself and others from place to place, or even world to world. He can even create a fistula in time or a "balcony on the Dark Tower" called the Gingerbread House. These abilities come at a high price - each use causes a minor hemorrhage in his brain, and Ted Brautigan believes a few more uses of Stanley's power may be fatal. Although Stanley is initially reluctant to speak, Roland recognises him and addresses him as "Stanley, son of Stanley". Confronted by the gunslinger he once idolized, and still addresses by his Hambry alias of "Will Dearborn", the man formerly known as Sheemie breaks down. It is apparent that he had still been feeling guilt over Susan Delgado's death, despite it not being his fault in the least.

Although Stanley survives the Breakers' rescue by Roland's ka-tet, he steps on a piece of broken glass during the battle. Roland is told that he died not long afterward of blood poisioning as a result of this.

Retrieved from "https://darktower.fandom.com/wiki/Stanley_Ruiz?oldid=16265"
Community content is available under CC-BY-SA unless otherwise noted.