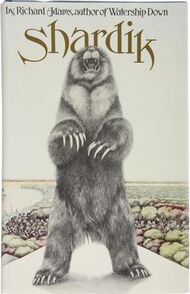 Shardik is a fantasy novel written by Richard Adams in 1974. The story is about a hunter seeking to kill giant bear that may be a god.

Kelderek is a young hunter nicknamed "Play-with-the-Children" because of his simple nature and love of small children. In the forest near his home on the river island of Ortelga, he sees an enormous bear. When a tremendous fire ravaged the forest, the bear managed to flee by swimming the flooding river and collapsed at the river's bank, to be found almost dead by Kelderek. The Ortelgans worship the bear-god Shardik and once ruled the entire territory now known as the Beklan Empire, but their territory and religion are now limited to a small barony of river-islands on the empire's outskirts.

Convinced that this bear is an incarnation of Shardik, Kelderek communicates this belief to the local priests and barons, eventually resulting in a military campaign to retake Bekla. The bear is sedated and caged by the priestesses to be carried forward with the Ortelgans but awakens from his slumber during a battle they are losing; as if in divine intervention, he breaks free, crushing the opposing army.

Shardik's worship is restored to central prominence in Bekla with Kelderek as the high priest to the recaged bear, but temporal power is held by the military barons. Still idealistic and unworldly, Kelderek is dismayed by the brutality and corruption that quickly surrounds him. When the bear escapes and flees again, it is Kelderek alone who follows in pursuit. The two of them stagger through the wilderness for a long time. Behind them, the capital city is torn apart by factions of rebels, and lawless chaos spreads through the entire empire.

On the brink of madness after days alone with no sleep, Kelderek follows the bear to a mysterious place called the Streets of Utrah. Here, Shardik enters one of the ravines comprising the Streels, and is presumed dead. A shepherd (later revealed as a guardian of the Streels) informs Kelderek that any who enter there are beings of great evil who are destined to die, with one past exception: a woman who entered the Streels but was able to climb out again, doomed to die horribly but by her death bring about greatness. This woman gave birth to a son as she left the Streels, a son who later grew to be a great hero who led the ancient overthrow of the Ortelgans from Bekla. As this story is told, Shardik emerges from the ravine and flees again into the woods.

Kelderek continues to follow Shardik, meeting many foes along the way, until he reaches Zeray, an outlaw town beyond the borders of civilisation. Here he re-encounters Melathys, a former priestess of Shardik. Having lost Shardik and his faith, Kelderek is captured by Genshed, a cruel slave-trader who already has a large group of children to eventually sell but is meanwhile tormenting them for his own amusement. Treating the children with his customary kindness, Kelderek is mocked and threatened by Genshed, who is on the point of killing him when Shardik erupts from the woods, mad and half-starved. The bear attacks Genshed, mortally wounding him before itself collapsing in the river. Kelderek, his faith and kindness restored but now tempered with knowledge of the world, returns to the town of Zeray with the children and attempts to re-establish a lawful society.

The epilogue skips forward a number of years. It is told from the perspective of a newcomer from Zakalon, a distant kingdom to the east of Bekla. This man, Siristrou, is the leader of the first embassy from Zakalon sent to reciprocate the first visit of a Beklan to their country. The formerly lawless border town is now the home of hundreds of orphans and refugees working together to build a better future. Kelderek is its mayor, widely regarded as a fair and wise leader, and is married to his love, Melathys. Kelderek takes the traveller into his home and tells him of the bear Shardik, now known as a great animal who taught the people of the land the meaning of both kindness and hardship. In the final passages, Siristrou stirs the logs in the fireplace and plays a game of spotting images in the flames: an island, a glowing knife, a barred cage, an old woman, a deep ravine, a shaggy bear; he recognises these images in turn, and finally remarks "That's a beautiful fire."

Connection to The Dark TowerEdit

It could be argued that Stephen King's Shardik (from The Waste Lands) could be the same, or inspired by, the Shardik of this novel.

Retrieved from "https://darktower.fandom.com/wiki/Shardik_(novel)?oldid=18646"
Community content is available under CC-BY-SA unless otherwise noted.