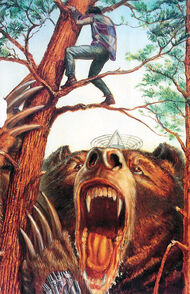 
Wolves of the Calla
Song of Susannah

“See the Bear of fearsome size! All the worlds within his eyes”
— An old saying

Shardik is one of the twelve guardians of the Beams that hold up the Dark Tower. It is a cyborg bear that stands 70 feet tall and has a contraption affixed to its head resembling a satellite dish (known as a thinking cap by Roland). Shardik was built by North Central Positronics, the mysterious company which was a part of The Imperium thousands of years prior to the events of The Dark Tower Series. Shardik was known as Mir by tribal groups who once lived in the woods of his domain, which in their language means, the world beneath the world. Shardik's functional longevity is most likely due to its internal nuclear power source.

Left on Shardik by the Old Ones is the following:

After several millennia of service watching over the beam it had begun to deteriorate and die. Biologically, the bear suffered an extensive infestation of worms. Mechanically, the bearings in its "thinking cap" were worn and, according to Eddie, about to freeze up, presumably resulting in the creature's death.

When Roland and his ka-tet arrive and set up temporary residence in Shardik's woods, the creature becomes visibly upset. Thinking them to be the "troublesome fire starters" who lived in his woods years past (delusions presumably brought on by extreme fever and madness), he decides to kill them.

Shardik runs to Roland's camp in the clearing to find Eddie. He chases Eddie into a tree and attempts to shake Eddie loose. In the first real test of her newly-learned gunslinger skills, Susannah Dean has to shoot the metal "thinking cap" on the bear's head. She succeeds and, as a result, kills the bear.

Post-mortem inspection reveals to the ka-tet that the bear is indeed one of the Guardians of the Beams. This, as revealed to the reader, is what Roland has been looking for so long. Following the creature's back trail they find the beginning of the beam and start on their final path to the Dark Tower.

Shardik is the name of a 1974 fantasy novel written by Richard Adams. It concerns a hunter who pursues a giant bear he presumes to have the power of God. After learning the name of the Guardian, Eddie Dean tells that the name reminds him of Rabbits. This is a reference to "Watership Down", another novel by Adams about a company of Rabbits traversing the countryside in hopes to find a new Warren.

Retrieved from "https://darktower.fandom.com/wiki/Shardik?oldid=21082"
Community content is available under CC-BY-SA unless otherwise noted.