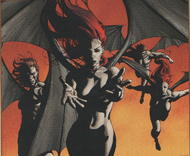 Selena & Morphia are two of Mid-World's most dangerous death goddesses (Can-char) and are both beautiful temptresses.


Selena is known as the daughter of the moon, with Morphia being daughter of sleep. Some also see Morphia as Lady of the Black Moon and so is attributed to the dark side of the moon as well as black magic and banishing spells. She is also the mother of Walter Padick.


They share a similar purpose. They try to tempt men into the clearing at the end of the path before their true time is up. They seek those with dire illnesses and tell them to embrace the pleasure and ease of death, extending their arms to the men they wish to take. The men will often do as the temptresses say and leave the world of the living not realising it is their spiritual body that leaves the world, not their physical one.

Retrieved from "https://darktower.fandom.com/wiki/Selena_%26_Morphia?oldid=6173"
Community content is available under CC-BY-SA unless otherwise noted.