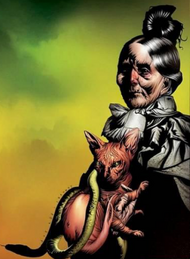 Rhea Dubativo, more commonly known as Rhea of the Cöos, is a witch who makes her appearance in Wizard and Glass. She was one of Roland's most formidable enemies during his time in the town of Hambry. She lived on Cöos Hill outside of Town with her two mutant pets, Ermot and Musty. Like the men of the Horseman's Association, Rhea played a part in the defeat of the Affiliation.

Rhea was born long before in what would later be called the Barony of Delain. She was never particularly clever or pretty, but she made up for it with her uncanny memory and capacity for spite. Rhea grew up with the belief in 'survival of the fittest,' determined to become as strong as she possibly could.

Her personality rendered her unpopular and even her family feared her at times. With no friends, she spent most of her time in the nearby swamp, playing with mutant frogs and worms. It was here she felt something drift into her eye, which was a shard of The Laughing Mirror, though she did not know this. This made her aware of magic in the world and looking through the now infected eye she witnessed that the swamps around her were full of spirits and phantoms.

As a young girl she honed her new magical abilities, moving to the next Barony where she became known as a 'Wise Woman,' where the spells and curses she used on patients caused hardship for anyone she helped. Due to this she never stayed in one place longer than a month. One village sought retribution from her but she gave them all the plague; only one survived. When she neared death she pleaded with the Crimson King to spare her and extend her life and allow her to join him. He allowed her to and instructed her to relocate to the village of Hambry to await further instructions.

Rhea is first seen when she was given John Farson's Bend o' the Rainbow, Maerlyn's Grapefruit, for safe-keeping by Eldred Jonas. She becomes entranced or "glammered" with it. The pink bend saps her energy away and makes her disregard her bodily needs. She regains some of this energy by drinking the blood of Cordelia Delgado. Rhea's hatred for Susan Delgado is a main catalyst for events in Wizard and Glass.

It begins when Susan arrives at her hut to be "proved honest" before going to Hart Thorin's bed as his gilly. She gives Susan the hypnotic suggestion to cut her hair off when she loses her virginity. Roland is able to prevent this, but he and Cuthbert Allgood go to her hut to warn her to stay out of their affairs. Rhea sets her pet snake, Ermot, upon Roland which he promptly kills. She sends for Sheemie using her pet mutie cat Musty, giving Sheemie a letter intended for Cordelia Delgado, in the hope of exposing Susan's sleeping with Roland and loss of virginity. Jonas comes back the day before Reaping to collect the pink glass. She comes along with the glass rather than part with it, until Jonas realizes that she is a liability.

After she is separated from the glass, her only goal is to get revenge upon Susan. She does this by telling Jonas where to find Susan and, later, by thwarting Susan's escape. Rhea and Cordelia are at the head of the mob that throws Susan into the Reap Day fire along with the stuffy-guys.

After Roland's return to Gilead, he sees her in Maerlyn's Grapefruit and believes she is on her way to the city. This is entirely a mirage made by the Grapefruit which leads to Roland killing his mother, as he mistakes her for Rhea.

At the end of Wizard and Glass, it is hinted that Roland met up with her again and killed her.

Rhea first appears in one of Stephen King's books in The Eyes of the Dragon. She plays a minor role and her appearance is an omen for disaster. She is meant to be identified with the Wicked Witch of the West from L. Frank Baum's The Wizard of Oz. She is seen in Maerlyn's Grapefruit saying, "I'll get you, my pretty!"

Retrieved from "https://darktower.fandom.com/wiki/Rhea_of_the_Cöos?oldid=20259"
Community content is available under CC-BY-SA unless otherwise noted.