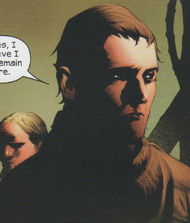 Randolph is a Gunslinger and ally of Roland Deschain. He is the one that discovers the giant laser that Edoacer Grissom uses on a prisoner. He is a scout and is very protective of his family, Chloe and Edmund.

Through desperation he betrays Roland and the other gunslingers in the hopes of having his family returned to him, who were taken by Slow Mutants. He arrives late to a meeting with Marten Broadcloak and discovers that Chloe has been killed.

In the hopes of getting his son back he hands Sheemie over into Marten's hands. He fakes some recon work, saying that John Farson's central ammo and tank dump is located at Rimrocks.

He asks for his son back for helping them and they return his son dead after using him as target practice. Due to this and the shame of betraying Roland he kills himself after Cuthbert Allgood beats him.

Retrieved from "https://darktower.fandom.com/wiki/Randolph?oldid=10060"
Community content is available under CC-BY-SA unless otherwise noted.