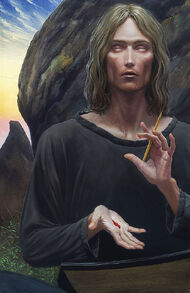 Patrick Danville is an artist kept captive in Dandelo's basement in its dwelling in Empathica until Roland Deschain frees him. He has the ability to draw pictures that become or alter reality.

Danville was held captive in Dandelo's basement on Odd Lane until Dandelo was slain. Dandelo knew of Danville's ability to change reality with his art because his pencils all had their erasers removed. Roland takes Patrick along on the road to the Dark Tower because of his ability. That ability comes in handy several times. He draws the Unfound Door that allows Susannah Dean to leave Roland's world. He also plays a critical role in the defeat of the Crimson King. Patrick draws a picture of the King, only to erase it. The only part of the King that couldn't be erased were the red eyes so that the eyes are all that is left of the Crimson King, that sit staring on the balcony of the Dark Tower.

Retrieved from "https://darktower.fandom.com/wiki/Patrick_Danville?oldid=19182"
Community content is available under CC-BY-SA unless otherwise noted.