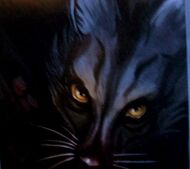 Quest for the Dark TowerEdit

Oy first approached the ka-tet timidly as they camped on the road to Lud, encouraged by Jake Chambers, who quickly befriended him. Jake called to him "Come on, boy!", to which Oy replied with his new name. Oy had been ejected from his pack, possibly due to his aptitude at mimicry, and was happy to follow Jake, who he calls "Ake".

Oy and Jake develop a special bond that translates into telepathy and the ability to switch bodies as they ran from the old vampires in the bowels of the Dixie Pig. At the town hall meeting in Calla Bryn Sturgis, Oy even performed the same self-introduction, including the bow.

Oy comforts Jake in his final moments by licking his face clean of the blood and dirt left when Jake saved Stephen King from certain death. Their final words are not revealed, but it is hinted that Jake passed on Eddie Dean's warning about Dandelo. Although Oy seldom spoke after Jake's death, he said "Olan" and sat at Roland's heel when given the opportunity to escape the treacherous journey. His allegiance to the ka-tet and Jake's memory eventually lead to his own demise to save Roland from Mordred Deschain.

Roland saw a portent of Oy's death whilst trapped inside Maerlyn's Grapefruit in The Long Road Home and Wizard and Glass, seeing him impaled by a tree branch. Oy still lived, he licked Roland's hand once while he was dying. Oy said "Olan" once, and then passed into the clearing.

In the Epilogue section The Dark Tower, Susannah Dean returns to New York and meets the twinners of Eddie and Jake, named Eddie Toren and Jake Toren. Both already feel like they know Susannah. In the "Coda" section Stephen King states that we can rest assured that a canine version of Oy will enter the picture as well.

Add a photo to this gallery
Retrieved from "https://darktower.fandom.com/wiki/Oy?oldid=19002"
Community content is available under CC-BY-SA unless otherwise noted.