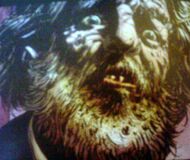 Nort was Tull's local devil-grass addict. He had progressed through smoking the demon weed to eating it, a stage of decrepitude which even Roland finds slightly shocking. Indeed, such was the advanced state of Nort's habit that a few days previously, according to Allie's account, he had actually died while out on the boardwalk and his present animated state is only due to the sorcery of the Man in Black, who had revived Nort for his own nefarious ends.

Nort is killed before the Battle of Tull takes place. From the manner of his death and the cloven-hoof mark branded into his forehead, it is likely that his second death was the result of a religious fevour, inspired by the preaching of Sylvia Pittston.

Retrieved from "https://darktower.fandom.com/wiki/Nort?oldid=20213"
Community content is available under CC-BY-SA unless otherwise noted.