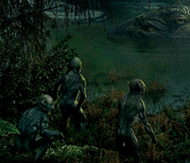 Appearances
The Wind Through the Keyhole
Known
Helmsman
Tallman

Mudmen or Plant Men are a group of Slow Mutants that dwell in lakes. They appear to impede and then assist Tim Ross in The Wind Through the Keyhole. Tim realizes that the swamp has been growing on the Mudmen and that underneath they are really Slow Mutants.

Tim first meets the Mudmen after he becomes stranded on a tuft of ground in Fagonard Swamp, he is attacked by carnivorous reptilian swamp creatures which he shoots with Joshua's Rifle.  The Mudmen, who were watching from the opposite shore, then believe Tim to be a gunslinger. Their spokesperson, Helmsman, gives Tim food, as well as Daria, after their leader, Tallman, approves.

They are later killed by a starkblast, an event they knew was approaching and even appeared to welcome.