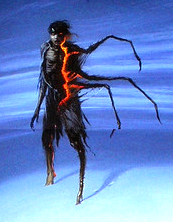 Mordred was effectively a Were-Spider, able to transform at will from a boy into a deadly spider-like monstrosity. As a result of his accelerated growth, he lived with an extreme and persistent hunger, a condition worsened in his spider state by an accelerated metabolism.

After Susannah and Mia were brought to the Fedic Dogan, Mia delivered Mordred, whereupon his first act was to consume his mother alive. Susannah managed to injure Mordred in his spider state during her escape, shooting off one of his legs. Mordred then sought refuge within the tunnels and was brought nourishment by Nigel.

Walter O'Dim attempted to manipulate him by getting hold of his birthmarked spider leg in order to open the door of the Dark Tower. When Walter and Mordred finally met, however, the young spider boy sensed Walter's intentions and proceeded to kill him in rather brutal fashion.

Mordred would later eat the remains of Dandelo and his horse Lippy, not realizing until too late that the latter's remains were toxic.

While in pursuit of Roland and Oy, Mordred's red father, The Crimson King, spoke to him telepathically from the balcony of the Dark Tower, telling him to kill the last of Roland's Ka-tet, for which he could rule the chaos by the Crimson King's side after the Tower fell. Mordred failed and was slain by Roland in the fields of Can'-Ka No Rey, with the help of Oy, who sacrificed his life to warn and protect Roland.

Mordred Deschain is based upon the Arthurian Legend of Mordred. Mordred was the illegitimate son of the famous King Arthur and Arthur's half-sister Morgaine. Morgause (Igraine's sister, she brought up Mordred) taught Mordred to hate his father. He is known as the traitor who, at the Battle of Camlann, fought Arthur and mortally wounded him. In the process, Mordred himself was killed.

Retrieved from "https://darktower.fandom.com/wiki/Mordred_Deschain?oldid=20196"
Community content is available under CC-BY-SA unless otherwise noted.