“There is no love in thought, nothing that lasts in deduction, only death in rationalism.”
— Mia
Mia 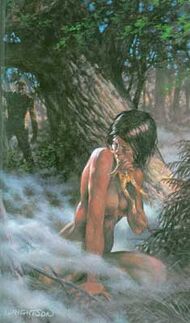 Mia, or mother, is a spirit that invades the body of Susannah Dean. Before entering Susannah's body, she was a succubus or a sexual vampire. The only goal in her life is to be a mother. Mia is white so that when she takes control of Susannah's body, it slowly turns white and grows legs.

Mia was born in the primordial soup of the Prim. She spent many years wandering, having sex with men until their deaths. Eventually, she observed a family raising a boy and she knew that was her life's purpose. Walter o'Dim gave her the opportunity to become a mother by promising her a child if she becomes mortal. He used a machine in Fedic to turn her mortal. Walter promised her seven years to raise her child.

Her association with Susannah began in The Waste Lands when Susannah had sex with the speaking demon while Eddie and Roland drew Jake through the door. Susannah became pregnant with Roland's sperm that had been twisted by the Crimson King. Mia entered Susannah's body when Susannah's former personality of Odetta Holmes invited her in.

The baby was transferred to Mia by a machine and it was Mia who showed the outward signs of pregnancy, not Susannah. Mia began taking over Susannah's body on some nights in order to feast on all sorts of creatures to feed her "chap". During the celebration at the end of Wolves of the Calla, Mia escapes to New York City through the Doorway Cave so that she can have her baby.

While Mia and Susannah wait in a hotel room for a phone call, they discuss the origins of the baby. Eventually, Richard Sayre calls and instructs Mia to go to the Dixie Pig to have her baby. There, Mia is taken through a door to Fedic where Susannah and Mia are separated. Mia gives birth to Mordred Deschain. Because of Mordred's extreme hunger, his first act is to eat Mia alive.

Retrieved from "https://darktower.fandom.com/wiki/Mia?oldid=19266"
Community content is available under CC-BY-SA unless otherwise noted.