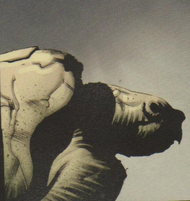 “Once you get into cosmological shit like this, you got to throw away the instruction manual”
— Maturin to Bill from It

Maturin is one of the guardians of the Beams that helps the Dark Tower. His physical form in Mid-World is presumably a cyborg like Shardik. It is hinted that this Beam is personified in the character of Stephen King. In actuality, the turtle's true form is much more grand and powerful. There is evidence of this on several occasions when it has come to aid warriors of The White.

In the Dark Tower story, it gives power in the form of the magic object that is left for the Ka-tet known as the Skoldpadda, (a name supplied by a Swedish UN diplomat, Mathiessen Van Wyckby). In Swedish turtle translates to sköld (“shield”) +‎ padda (“toad”). which has the power to fascinate humans, can-toi, low vampires and the Low Men. It does not affect the Elder Vampires in the Dixie Pig. Father Callahan uses the Skoldpadda to distract the Crimson Kings bondsmen to let Jake escape the the kitchens and then the tunnel to End-World.

The Turtle is said to have vomited out our Universe when it had a stomach ache. IT thought that the Old Turtle Enemy of his died after this.

He bears a resemblance to the World Turtle of Hindu myth. He also has a grandfather-like voice and is shown to be kind and loving. There is a representation of the turtle in Dag Hammarskjold Plaza, a building built to protect the Rose.

The poem written about Maturin is featured prominently within the series. Only the first two lines are mentioned frequently.

"See the TURTLE of Enormous Girth"
"On his shell he holds the Earth."
"His thought is slow, but always kind."
"He holds us all within his mind."
"On his back all vows are made;"
"He sees the truth but mayn't aid."
"He loves the land and loves the sea,"
"And even loves a childe like me."

Retrieved from "https://darktower.fandom.com/wiki/Maturin?oldid=20793"
Community content is available under CC-BY-SA unless otherwise noted.