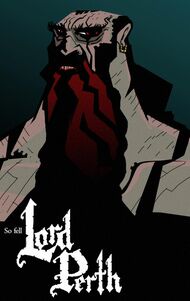 Lord Perth was an ancient Warlord of Mid-World, and is recounted by the people of Mid-World through poetry.


The poems recount how he was a giant of a man who went forth to wage war with a thousand strong men. However while he was still in his own country a young boy threw a stone at him which hit his knee. Lord Perth fell and broke his neck, dying instantly. Outlaws to this day maintain his story as an omen of bad luck, as it shows them that even the mightiest of men can fall.

Parts of the poem are recounted whenever a great person dies such as,
So fell Lord Perth, and the countryside did shake with that thunder.


Most people believe the boy who felled Lord Perth resided in the forests of New Canaan; over time, however, many folks of Mid-World have laid claim to him and so it is not truly known where the boy came from.

Retrieved from "https://darktower.fandom.com/wiki/Lord_Perth?oldid=19332"
Community content is available under CC-BY-SA unless otherwise noted.