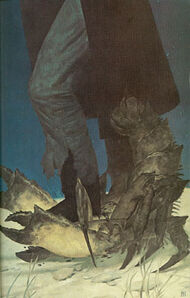 Appearances
The Drawing of the Three
Known
n/a

Lobstrosities are bizarre creatures that live on the beaches of the Western Sea. They look like a cross between scorpions and giant lobsters measuring about four feet long,1 and a half foot wide, with sharp serrated beaks, and eyes on stalks.

Roland Deschain observes that they constantly murmur questions: Dad-a-chum? Dum-a-chum? Ded-a-chek? Did-a-chick? Later discovering they are venomous but despite this they are edible which is proven by Eddie.

It is thought that the Lobstrosities are perhaps the same creature as one on a different level of the Tower in Bridgton, Maine. Here a Thinny is accidently created by the US military who are doing experiments under "Project Arrowhead" and rips a hole in Todash Space releasing hordes of Todash monsters on the unsuspecting inhabitants of the town. One of the creatures that kills a townsperson, Ollie, bears a striking resemblance to the Lobstrositites.

The Lobstrosities also bear a passing (though possibly coincidental) resemblance to a group of real-life prehistoric animals called sea scorpions or eurypterids. These were predatory arthropods, up to 8 feet long, that lived in the ocean between 600 and 300 million years ago and resembled giant lobsters or scorpions.

Retrieved from "https://darktower.fandom.com/wiki/Lobstrosities?oldid=20566"
Community content is available under CC-BY-SA unless otherwise noted.