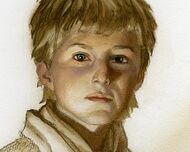 John "Jake" Chambers is one of the main protagonists and a member of Roland Deschain's second Ka-tet in the Dark Tower Series. He was Roland's spiritual son.

Jake is a smaller, blonde version of Roland. He is described as possessing sharp senses, fearless demeanor and desire to find where he belongs on the quest for the Dark Tower. Even without directions from Roland, Jake Chambers seems to have strong survivor instinct in the mix of the worlds. Due to the fact that he was killed by the man in black, he often gets overwhelmed about his role in the world and takes potential signs and hints from the universe very seriously. He finds it very important that the ka-tet be open and honest with one another.

Jake and Roland develop a very strong father-son bond throughout the series.

Jake also resembles Alain Johns, another gunslinger, with their stable, reserved personalities and their talent with the psychic skill referred to as "the touch."

Jake is very attractive, with long blonde hair and blue eyes, around twelve years old, with the demeanor of a much older person.

Jake has a natural knack for being a Gunslinger, learning how to shoot quite quickly. His weapon is his father's Ruger.

In addition to being a natural Gunslinger, Jake has special abilities, probably as a result of being split, which allows him to sense the properties of Ka. As a result, he'll preternaturally sense things that may be significant later. Lastly, Jake seems to have an easier time communicating to the rest of the Ka-Tet, his transmissions louder and clearer than most.

Quest for the Tower[edit | edit source]

Instead, Jake formed a close relationship with his housekeeper, Greta Shaw (who nicknames him "'Bama"). In 1977, as he is going to school, Jake is pushed into oncoming traffic by a "man in black," and killed.

After dying, Jake arrives at a "way station" in Mid-World (a building in the middle of the Mohaine Desert with an atomically powered water-pump). He spends many weeks living in the way-station, with his memory of his life slowly fading. He encounters the Man in Black again at the way station. He also meets Roland, who passes into the way station, nearly dying of thirst. The frightened Jake takes care of Roland and gives him water and food. Roland then hypnotizes Jake into telling him where he came from and how he died. Roland feels sorry for the young boy and tells him that he will help him to find the Man in Black, who he realizes killed Jake in his world. While Roland and Jake begin to become attached to one another, Jake is still afraid that Roland will betray him to his quest, something that would come to pass.

When Roland and Jake finally catch up to the Man in Black under the Cyclopean Mountains, Jake begins to fall off a crumbling, ancient bridge located deep underground, and he begs Roland to help him up. The Man in Black offers Roland the choice of either saving Jake or getting answers from himself. Roland, desperate to find the Dark Tower and knowing that the Man in Black knows his destiny, allows Jake to fall to his second death in the book/series, a choice that will haunt him for the rest of his life. Jake's final words as he plunges into the abyss are: "Go, then. There are other worlds than these."

The Drawing of the Three[edit | edit source]

In theThe Drawing of the Three, Roland goes through a doorway into the mind of Jack Mort, a serial killer. Roland discovers that Jack Mort was actually the man who pushed Jake in front of the oncoming car, dressed in priest black, leading Jake to confuse him with the Man in Black. Roland causes a time paradox by preventing Jack from pushing Jake into the car.

Because Roland interfered with Jake's death by Jack, both Roland and Jake (now alive in 1977) suffer split timelines in their heads. Roland remembers meeting Jake at the way-station and letting him fall, while simultaneously able to recall never meeting him at the way-station. Similarly, Jake remembers his life in New York City continuing (as it is), but also remembers dying and going to the way-station and meeting Roland, which leads Jake to wonder if perhaps he imagined Roland. Both Jake and Roland realize they're going slowly insane. While Jake is in his version of New York he makes several crucial discoveries that reappear in the novel and series. He writes "My Understanding of Truth", and buys two childrens books: Charlie the Choo-Choo and Riddle-De-Dum. He also discovers the Rose and a key in a vacant lot located in Turtle Bay, New York City.

Roland, with the help of his new companions, Eddie and Susannah Dean, find a way to "draw" Jake out of 1977 to join their ka-tet. Once they enter Mid-World, both Roland's and Jake's minds become stable again with the memory of meeting each other and Roland promises Jake that he will never let him die again. The ka-tet continues to follow along the path of the beam through River Crossing and into Lud. Along the way Jake meets a billy-bumbler he names Oy. The two become inseparable.

Wolves of the Calla[edit | edit source]

Jake has a strong gift of "the touch" and is aware of certain events without realizing why. He introduces himself as being of the "ka-tet of 99" almost subconsciously. Jake leaves the ka-tet for some time to stay with Ben Slightman the Younger. The two form a quick friendship that is sometimes strained when Jake reveals that in some ways he is older than Ben, even if he is physically younger. Jake's gift with the touch helps him to discover the truth about the wolves. He and Ben secretly practice throwing Orizas at night, and Jake reveals to Roland that he is quite good at it. In the fight against the wolves, Jake proves himself once again to every bit the gunslinger Roland thought he could become. The loss of Ben Slightman the Younger is very upsetting to Jake.

Jake, Oy, and Father Callahan follow Susannah to the New York City of 1999 in order to save Susannah from the Crimson King after Mia delivers her to his henchmen. Jake and Father Callahan are nearly taken in by Black Thirteen that they carry with them and decide to stow it somewhere safe before continuing. Later, Jake, Oy and Father Callahan prepare to launch an assault on the Dixie Pig, where Susannah is being held by the soldiers of the Crimson King. Although the sköldpadda that Susannah has left behind for them gives them some hope, neither expect to succeed the encounter and they close the chapter with guns blazing.

Jake and Callahan battle the evil infestation within the Dixie Pig. Jake uses his touch and Oy to get past a mind-trap left behind by the Old Ones. After finding a door, he is reunited with Susannah. With the ka-tet once again intact they fight to save the Breakers and the Beam. Jake then travels to the Keystone World with Roland to save Stephen King, breaking the fourth wall. He is hit by a passing truck while attempting to push King out of the truck's path, and dies while Roland hypnotizes King into writing the rest of the story.

After Jake dies and Roland comes back from gathering supplies, Roland wraps Jake's body in a blue tarp, refusing to cover the boy's face until he is actually buried. Roland then digs a hole and delivers Jake's Eulogy. When he is done, Roland lowers Jakes body into the hole and covers it with rocks (to prevent predators from eating his body). Roland leaves instructions to Irene Tassenbaum to plant a rose on his grave.

His name would later appear in a memorium on the plaque at the Tet Corporation building at 2 Hammarskjöld Plaza next to Eddie's.

In an alternate world (the one Susannah Dean walks into after she leaves Roland), Susannah meets the twinners of Eddie and Jake, who are brothers, and share the last name Toren (after Calvin Tower's actual last name).

Retrieved from "https://darktower.fandom.com/wiki/Jake_Chambers?oldid=20232"
Community content is available under CC-BY-SA unless otherwise noted.